The hockey bug hit fast and furious in our family. After short stints with baseball, flag football, wrestling and basketball, my husband and I found ourselves watching our young sons chase a puck around a rink. Their flashy toothless grins (not from injuries but age-appropriate missing teeth) behind their helmets were endearing and all was well in our extra-curricular world.

Soon, at a hockey clinic for our older son, someone thought it would be funny to put his little brother in goalie equipment. A few practices later, the little brother defended the net, and soon I was faced with the news that he wanted to actually play this position. I accused my hubby and the coach of insanity. Could they not see my petite son, weighing less than 50 lbs was not goaltender material? Strike one for mom. I was outnumbered by opinions. Puck-chasing was one thing, but being a puck target was a different story. This was spiraling out of control and had to end.

“Honey, you’re too small to be a goalie,” I bluntly told my little boy. “Marc-Andre Fleury (NHL Penguins goal-tender) isn’t big!” he shot back. Strike two. Desperate, I tried the ego angle with him. “Wouldn’t you rather be the one scoring goals instead of stopping them?”

Exasperated, he finally blurted out, “But mom, I feel so much bigger in goalie equipment! That’s what I want to be!” Strike three. I didn’t see that one coming, but it made perfect sense. This gave my smallish son a chance to feel big, and he had total faith in the equipment that did so.

Can you see where this is going? If a hockey net represents our faith, and we feel small defending the pucks that life hurls at us, don’t we feel bigger with God’s padding and protection covering us? As the hockey years went by, more analogies surfaced. Coaches would admonish teammates to “Be there for your goalie! Do not let him defend alone!” When a brother or sister is facing a trial, do we let them defend alone, or are we there for them?

I quickly learned things about goalie equipment I never noticed before, like a throat protector that hangs below the chin of the helmet for the rare event that a puck slips in between the helmet and chest pads. I couldn’t sleep until we bought one, and I’ve seen it do its job. I’ve also witnessed a puck hit my son square in the face and bounce off his helmet cage. He was rattled, I missed a few heartbeats, but we both lived and the equipment proved its worth again. Doesn’t God know our vulnerabilities, and hasn’t He provided special equipment for each one? Ephesians 6 comes to mind.

Goalies can feel the weight of a team’s loss the most. Coaches have told Logan that half a goalie’s battle is mental, shaking off the last missed save and making the next one. If you’re a Penguins fan, you’ve seen Marc Andre’s worst game quickly followed by his best. Can the same be said for our spiritual struggles?

Goldberg: Be careful man, it almost hit me that time!

Charlie: Goldberg, you’re the goalie. It’s supposed to hit you.

Goldberg: Does that sound stupid to anyone else?

Enjoy the video clip when he says, “My mother would not approve!” 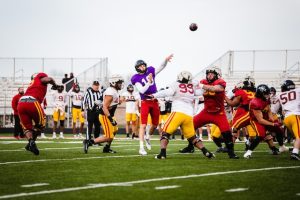 Parable of the Quarterback

It’s been a busy day for Jesus. Earlier in the day, He was addressing some of His followers and referred to them as His family (brother, sister, mother). Now, Jesus has left the house where that occurred and is sitting by the sea. A multitude of people have...