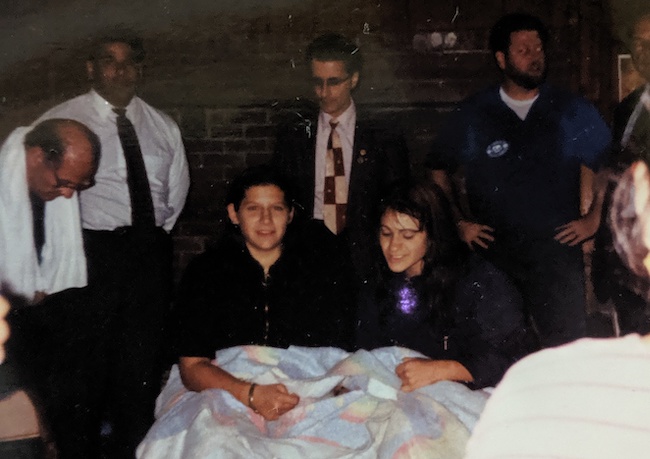 Today’s article by Sister Stefanie Callens is another installment in the series, “The Day He Found Me.”

In a few days on Sept. 21, it will be 22 years since I surrendered unto the Lord. I cannot believe how quickly time goes by!

I was at an Atlantic Coast Area Campout in New Jersey. At 14 years old, my plan was to hang out with my friends and maybe talk to some of the cute boys who were going to be there. As we were roasting marshmallows that Saturday night, my friend, the late Sister Stephanie Crupi, and I were talking with my dad and a couple other ministers about why we had to actually be called to get baptized.

We went to church on Sundays, prayed, and followed the Lord’s teachings. Why couldn’t we just be baptized then and there? Instead of preaching to us, the brothers simply told us to pray about it. If we woke up in the morning and the first thought we had was baptism, then we were being called, and that would be our day.

Steph and I slept in the same bunk that night, and when we woke up, we looked at each other and asked if we were thinking about it. We both said no, so we shrugged it off and got ready for breakfast and church.

I’ll be honest with you; we were not paying attention to the sermon at church. I remember playing with tissues and teasing some boy sitting in front of us, quietly talking and laughing. But then, God intervened.

Brother Jim Sgro was preaching — he was not one of the ministers we were talking with the night before — and he said (loudly) if you were thinking about baptism last night, then today is your day. God is calling you into His fold. The Spirit of God hit us both at that moment. Without talking or even looking at each other, we simultaneously stood up and surrendered our souls to the Lord and were baptized a couple of hours later, dressed like mechanics in dark blue jumpsuits.

As a confirmation that we were both being called, a brother in the congregation said he had been following along in his Bible, reading ahead of where Brother Jim had been reading. When he read the scripture saying you need to be baptized, he heard a voice say, “Stefanie, Stephanie.” We stood up a minute later.

Over these past 22 years, life has not been pain and sorrow free, but having the Lord in my life has allowed me to find joy during the rough spots. Even though I don’t feeI deserving, God is ALWAYS there, answering my prayers sometimes even before I utter them. I am sure all of you who have entered the waters of baptism would have to agree with me that it’s the best decision you’ve ever made in life.