What to Do? Finding the Answer in Scripture 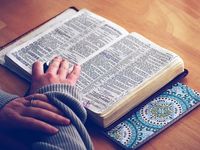 Today’s Miracle Monday is a testimony from Brother Rich Nath about a time when he was at a career crossroad, and God showed him what to do through His word. Enjoy!

By early 2007, I had been working shifts for over six years. Although my mind loved working the night shift, my body was starting to get weak. I worked a four-on, four-off schedule, and when on nights, it was taking me two of my four off days to recover. I asked my managerial team if there were going to be any future openings in the department that didn’t require shift work. The answer was there were no current or foreseeable plans for any.

With that, I made looking for a new job a matter of prayer and started knocking on the proverbial doors. After a few months of sending résumés and searching the Internet for job openings, I had exactly zero interviews. Needless to say, I was becoming discouraged.

One evening, during my normal scripture reading routine, I started Alma 34. My ears started to tingle — a reference to Brother Jim S.’s sermon at General Church conference this month — as I read the beginning of verse 3:

I stopped for a second, and even though this chapter has nothing to do with job hunting, the Lord was answering my prayer with this scripture. The text continues, “…because of your afflictions; and he hath spoken somewhat unto you to prepare your minds; yea, and he hath exhorted you unto faith and to patience.“

As Charlie Brown says, “THAT’S IT!” The answer that I had been longing and searching for was right in front of me. What was I supposed to do? Have faith and be patient. So that’s what I did. I stopped looking for a new job and remained prayerful that God would take care of it. I highlighted the verse and wrote the date (4/25/07) in my Book of Mormon right next to it.

About two months later, I got a call from a recruiter about a job that might fit my skills and experience. There were some drawbacks, but I thought I would at least interview and learn more about the position. Then, a week later while on vacation in Pennsylvania, I received an email from my current boss.

A month earlier, I submitted a proposal for a new training position because our department was desperately in need of one. The newly hired director told me that he appreciated my idea and would take it into consideration, but he couldn’t promise it would come to fruition. My boss’s email said that they were creating a new position called Ops Trainer, and I needed to put in for it right away. I did, and God blessed me with an eight-to-five job, Monday through Friday. I got to stay with the same company and retain all the benefits that I’m so thankful and blessed that they offer.

The other job the recruiter told me about never went anywhere. As a matter of fact, not long after I was promoted to Ops Trainer, the other company abruptly went out of business. God said to be patient and have faith. I did, and He took care of the rest. He still does each and every day. I give Him all glory, honor, and praise.

Thankful for something? Tell us!

Next month is November, and we’re focusing our Miracle Mondays on things that you’re thankful for. Are you particularly grateful to God for something He did for you recently? Maybe He opened a huge door for you — or closed one that could’ve led to heartache. Maybe you’ve been on a journey, and you’re finally starting to put the pieces together and see God’s hand of guidance. We’d love to hear about the things you’re thankful for. Click here to share your story with us.