The Words of Mormon 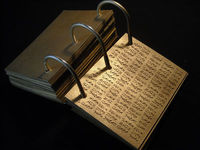 OK, who is Mormon and why do we care about his words?

Is Mormon the founder of the Mormon church? No, he’s not.

Is he the author of the Book of Mormon? Well, sort of, but not exactly.

Mormon is best described as the historian of his time, the keeper of all the various books and writings of men like Lehi, Nephi, Mosiah, Alma, etc.

As any good historian should do, Mormon eventually organized all of the material in his possession and sat down to produce a book that would relate the story told by all of this writing. There was way more material than could ever fit between two covers, so he chose what to include and not include and abridged a lot of it so the story could be told without necessarily including all of the painstaking detail.

Part way through the writing process — when Mormon had reached the point in the story that corresponded to the beginning of the reign of King Benjamin — he noticed a separate set of engraved plates that contained many valuable prophecies given to Nephi and others, including prophecies of the coming of Christ. He felt strongly that the Lord would want this information included in his book — the only problem was that he had already finished the writing covering the lives of Lehi, Nephi, and their descendants. To include this additional information would duplicate the same time period, potentially causing some confusion for readers. What to do?

As any servant of God should so, Mormon went with what he felt the Lord wanted, even though the flow of his book would be thrown off. After adding this information from the “small plates of Nephi” to his book, Mormon added a note to inform the reader what he had done. This note is titled “The Words of Mormon.” It was, of course, written “many hundred years after the coming of Christ” (verse 2), not at the time period that the story is up to at that point in the book.

If you’ve read the Book of Mormon, then you may be asking, “What duplication? There’s no duplication of time periods in the Book of Mormon!” And you would be right — the book begins with Lehi leaving Jerusalem in 600 BC, continues through his descendants, and then goes right to the story of King Benjamin. So, where’s this duplication that Mormon is talking about?

There is no duplication because of what happened during the translation process. Joseph Smith allowed the first 116 translated pages to be removed from the house where the translation was being done — those pages were never returned and were not included in the translated Book of Mormon. Those pages covered the exact part of the book that Mormon had completed prior to noticing the “small plates.” If Mormon had not included the “small plates” information (appearing under the titles 1 Nephi through Omni) in the final book, that time period would have been lost entirely from the book and the story we read today would begin with King Benjamin and the Book of Mosiah.

Mormon had this valuable information available to him because — even though it may have seemed illogical at the time — Nephi followed God’s direction to maintain a second set of records (see 1 Nephi 19). And because Mormon also followed God’s direction to include this information in his book — even though it may have seemed like a haphazard presentation of the material — we get to know about Lehi and Nephi and the various prophecies. God wanted us to have this information, and he used His servant Mormon to include it in the Book of Mormon.

This is why we care about the words of Mormon.

With the completion of blog articles for the Books of Jacob, Enos, Jarom, Omni and Words of Mormon, here is an index of the 11 articles for your reference. I appreciate all of the kind feedback I have received on the Book of Mormon blog articles and I thank God for bringing them forth. As of now, it is my intention to continue into the Book of Mosiah. I welcome your prayers for continued inspiration to bring these blog articles to you.

Blessed are the Pure in Heart (Jacob 3)

Being a Commander (Jacob 4)

They Can’t Both Be Right (Jacob 7)

What Our Children Remember (Enos)

How to Be Exceedingly Rich (Jarom)

The Book of You (Omni)