The Power of the Lord was Present to Heal 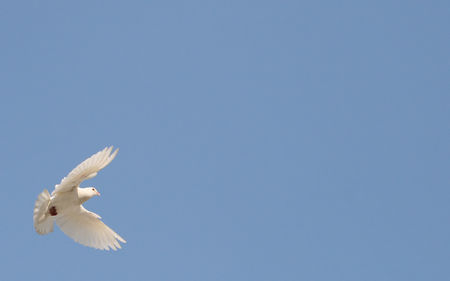 “…and the power of the Lord was present to heal them” – These were the words that Brother Jerry Valenti read from Luke 5 to introduce the subject of miracles as he addressed a group of people at my home on October 8, 2019. He said that this should be our prayer for the day – that the power of the Lord would be present in this home on this day to heal all who were in need such that we would witness miracles. He shared many miracles from his own life to illustrate that the power of God is still very much available to us today.

It was something of a miracle that this day even came about. I had been corresponding with Brother Jerry via email, requesting prayer for my granddaughter Gia who was born with a loss of hearing and other complications, and he graciously offered to visit my home to pray for her in person. Not wanting to keep this potential blessing to myself, I extended invitations to several of my friends and relatives to come to my home that day. We wound up with 25 people in attendance!

After my daughter Jackie and my granddaughter Gia were anointed, others came forward one by one to also be anointed. Some hankies were anointed as well to be brought to others in need. Now, approximately four months later, I’m blessed to be able to share these miracles from the people who were anointed that day:

1. I invited my friend Barbara to join us as she was going through a very difficult time with her son Jaysen. This is Barbara’s testimony: “On October 8, 2019, my friend Sherry invited me to a church gathering at her home. I accepted the invitation as I had recently been going through a rough time with my oldest son, Jaysen, who had separated himself totally from our family.

At one point during the gathering, individuals and hankies were being anointed and a strong desire came over me to ask for a hankie for my son even though I was unfamiliar with this. As the hankie for Jaysen was being anointed, I was overcome with emotion, unable to stop sobbing. I felt embarrassed by my lack of control! I was raised in the Catholic Byzantine faith and never experienced anything as powerful as I did this day. I truly did not want this gathering to end.

I am thankful to report – Immediately after receiving the hankie, Jaysen’s life began to turn around. His health began to improve and he rejoined all of us after a long separation. Jaysen spent all of the holidays with our entire family and has a positive outlook on his future. I am rejoicing!”

2. A hankie was anointed for a friend who recently suffered a heart attack and given a very poor prognosis. Thankfully, he was eventually able to have surgery and is now experiencing a full recovery.

3. Ashley, a young mother expecting her second baby, asked to be anointed due to early symptoms of pre-term labor. Six weeks later, Ashley actually had to have labor induced because the baby was becoming too large and her doctor wanted to avoid a complicated delivery. Praise God, Gabriella Pauline was born on November 15, 2019 without complication!

4. Robin asked to be anointed due to frequent episodes of total night blindness. She was evaluated locally and many thoughts crossed her mind, including possible Macular Degeneration or optic tumors. After being anointed she was reevaluated at the Cleveland Clinic where doctors told her all tests came back normal!

5. Jill Eizonas was scheduled to work on October 8 but a change in personal plans allowed her to attend our home meeting. This is Jill’s testimony: “I was originally to work on October 8 but an unexpected change of plans allowed me to attend the church meeting held at the home of Sister Sherry and Brother Ralph Creighton. I was so deeply touched by the beautiful spirit and love that filled the room during the gathering of the Saints. The message for the day delivered such a life-changing inspiration that I knew I had to turn my life over to God.

On December 15, 2019, I renounced all sins and gave my life to the Lord as Brother Adam Costarella and Brother Mike Italiano presided over my baptism in the icy cold waters of Lake Mosquito.”

6. During my daughter Jackie’s pregnancy she contracted mono, causing her baby girl Gia Grace to be born with a hearing loss in both ears. Before Gia was six months old, she was anointed several times and each time God answered prayers as her left ear would show improvement. The anointing of October 8 was scheduled such that it would occur prior to her having surgery to insert tubes into her ears to remove fluid buildup.

Three days after being anointed, Gia underwent surgery and for the first time my daughter and son-in-law were told her hearing was “completely normal and fully restored in her left ear.” What a marvelous, wonderful savior we serve!

As I write this, I praise God as Gia is surpassing all medical expectations. In April, Gia will be returning to the doctor for her 12-month checkup; we solicit your prayers that God may touch her right ear and make her whole.

In conclusion, I want to share a short dream my husband had the morning of October 8. In the dream he heard a knock on the back door. He opened the door to find an older couple dressed in church attire. As he answered the door the couple stated “We are here for the church meeting today.”

I’m so thankful to God for this momentous day on which the power of the Lord was present in my home to heal so many people. It was truly a day of miracles!