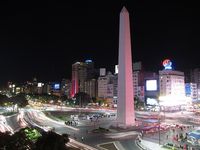 I never liked staying at home. I was only in Buenos Aires for five months, and I wanted to make the most of my time. Whether I tried a new bakery, coffee shop, shopping mall, or museum, I always liked to explore. One morning, I decided to venture in my new town.

The subway made me most comfortable when exploring. I knew exactly where each train would take me, and I didn’t have to guess about the stops. The train stops where the train stops, and there is no element of surprise. Busses, on the other hand, are free to go wherever they desire. There is no map to follow, and stops have to be requested. I rarely took busses while traveling through Buenos Aires, but for some reason, I decided to take a bus this morning.

I got on the bus not exactly sure where I was going. While looking through the window, I started to realize I had no idea where I was. To put this in perspective, Buenos Aires is a bustling, modern metropolitan city, like New York or Chicago, with people, cars, and noise everywhere at all hours of the day and night, but I was seeing empty dirt roads and endless space on this bus ride.

Nervous thoughts began to flood my mind: Where in the world was I? Surely I couldn’t have gone that far from the city on this bus. Do I say something to the driver in hopes he will understand my elementary Spanish? Why am I the only passenger left?

To my shock, the bus stopped, and the driver looked back at me in his rearview mirror. He told me it was the end of the line and I had to get off. There I was on a dirt road in South America with a prepaid cell phone that had no service trying to communicate in my second language. In this time of need, I cried out to God to help me. I couldn’t call anyone for help. There was no one around to direct me back to the city. I had no idea what to do. I knew God would keep me safe, but I wasn’t sure how I would get back home.

Aimlessly, I started walking back in the direction the bus came from, asking God to somehow help me get back to my apartment. To my shock and surprise, a taxi came driving down the road. On a dirt road in the country with no one else around, a taxi showed up for me. It stopped in front of me. I got in, showed the driver my address, and 45 minutes later, I was back in front of my house in the city.

That taxi was my angel in disguise. Not only did it seemingly appear out of thin air, but the driver knew exactly where my apartment was, how to get there, and I had enough money to pay the fare. God has never left my side my entire life, and spending a semester in Argentina was no exception. I believe I experience God’s angels in disguise each day, and it is my hope I would recognize and remember the help God sends my way.

Next month’s Miracle Monday theme is … weather! Do you have a story of how God made the sun shine when rain was supposed to fall? Maybe He diverted a storm, parted the clouds, or sent a cool breeze. We know that the elements are at His command, and we’d love to hear your stories confirming that. Click here to send them to us.