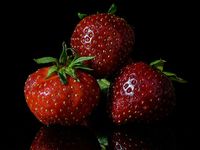 Today, we are sharing a miracle experience from Sister Debbie Kyriakakos. Enjoy!

This miracle took place in the summer of 1987 when I was pregnant with my third child. One afternoon, I decided to stop at a local strawberry stand with my other two children. It was located on a road that ran along quite a steep hill. I pulled into the top of the rock-covered driveway. I parked the car directly in front of the strawberry stand. I turned off the engine and told my kids to stay in the car. The younger of the two was in a car seat, and I told him to stay in it. I would only be a couple minutes, and I could see them clearly.

While I was getting my strawberries, I saw out of the corner of my eye, my car rolling backward down the driveway toward the road that was on that steep hill. I started running toward the car, but I couldn’t catch it. All of a sudden, I saw another car that was preparing to leave the driveway, stopped and waiting to turn out onto the road. I saw it was an older couple in the car. The driver must have seen my car coming toward their car with my kids in it. They didn’t turn out onto the road but let my car hit their car to stop it!

I reached the car only to find my youngest out of the car seat and in the front seat of the car. I didn’t see my older child. Then I heard her crying and saw she was with the woman in charge of the strawberry stand, blood on her shirt. She had opened the car door when it was rolling and jumped out! As she jumped, the bottom of the car door hit her head, cutting it, and she later had to get about five stitches.

Meanwhile, I got in the car and drove it back to the top of the little hill, figuring that the little one had gotten out of the car seat, climbed into the front seat, and put the car into reverse, which made it roll. All of this took place in a mere two or three minutes.

When it was all over, I looked for the older couple, and they had driven away. Who would be kind enough to sacrifice their car for my kids’ safety and then not expect anything in return? I never got to thank them, but I thanked God my children were spared and for my angels in disguise. I have thought of them many times over the last 29 years and still thank God for them.

By next month, many of you — or your kids or grandkids — will be back in school, whether you’re the one sitting in a desk or standing in front of the podium. Has God ever done something miraculous for you or a loved one in school? Whether it was providing you academic help, a miraculous admission, or sparing you from a scary or dangerous situation, we’d love to hear about the Lord’s goodness in the classroom. Click here to share your story.