Miracle Monday Flashback: A Mother’s Prayers on the Battlefield 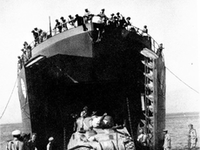 This month, we’re taking you back to some of our most popular Miracle Monday submissions from the past. Today’s post was submitted by Sister Mary Ann Heaps and originally published on May 12, 2014. Enjoy!

I want to honor the Lord for protecting my late husband Rusty Heaps in battle during his service with the U.S. Navy during WWII.

May is a good month for me to tell this story – May 1 is “May Day” (an international stress signal), May 8 is VE Day, May 16 was Rusty’s birthdate, May 17 is Armed Forces Day and May 30 is the traditional Memorial Day.

When Rusty was in training, he left the U.S. on a large seafaring vessel that looked something like the one pictured in this article.

He was later promoted to coxswain (an enlisted sailor who controls a boat that is small enough to be carried aboard another vessel).

The miracle occurred when Rusty was 18 years old, controlling an open boat transporting his team onto beachfront battlegrounds. He dropped off his team on the battleground during the invasion of Normandy and witnessed his friends being killed at the shoreline when they got on the ground.

As he began returning to his boat in the ocean, he was surrounded by explosions. He watched the horror of his allies drowning, and the last thing he saw of them were their hands straight up and slowing disappearing downward.

Witnessing the dying men and knowing that he was also in great danger, he feared for his life. Out of panic, he screamed out, “MOTHER!” and he thanked God he made it back to the boat unharmed.

After Rusty returned home, his mother asked him what was happening on a certain date and what danger was he facing. She told him she was awakened at 4 a.m. on that date because she heard Rusty’s voice calling out “MOTHER!” with terror and fear.

Feeling that he was in great danger, she immediately knelt by her bed and prayed, asking the Lord to watch over him, protect him, and keep him from all harm. Because of the 9-hour time difference between the U.S. and France, they realized she awakened at the exact hour when Rusty called out her name. This, indeed, was a miracle in Rusty’s life, confirming God keeps His promises to us.

Rusty served our country and received an Honorary Discharge along with an Area Medal, two Battle Stars, and one Victory Medal. To me, he was a hero, and I’m so thankful to God for preserving his life.

Next month, our Miracle Monday theme is dreams. Has the Lord ever given you a dream to provide direction, comfort, or some other need? We’d love to hear about it. Click here to share your story.