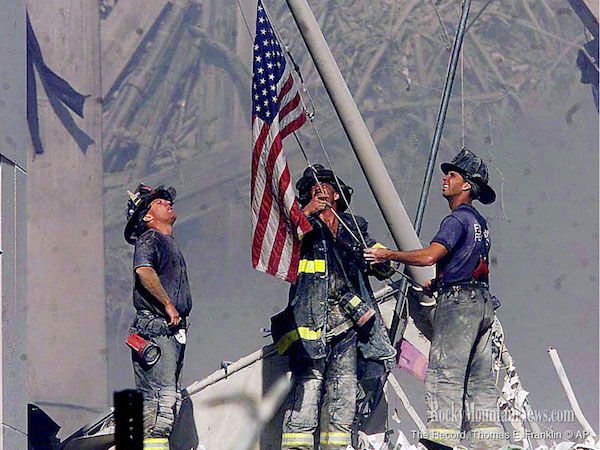 In 2001, I worked at the World Financial Center across the street from the World Trade Center. On September 11, we heard the explosion and felt the blast effect from the impact of the first plane hitting the North tower. After a few minutes of confusion, we saw the second plane hit the South tower and felt the blast effects again. At that moment, we knew a terrorist attack was under way, and we began to evacuate the building.

Before exiting, I called home, but my wife had already left to pick up our two children from school. I spoke to my one daughter, but I could only tell her “I love you,” because she was too young to know what was happening. I dropped the phone and ran for the exit.

Having been present during the 1993 terrorist bombing, and being able to get near the buildings, I thought I’d do the same thing, clearly not comprehending the full magnitude of the day.

As I approached the Trade Centers, I saw people running past me away from the buildings. Many were bloodied and clearly in shock. I was now within 100 feet of the North tower, staring straight up, and I witnessed many disturbing sights. I was slowly becoming terrified, and, sadly, I was unable to help anyone. I just stood there watching the tragedy unfold.

I was suddenly startled by a deep, firm, divine voice that said, “GO HOME.” It was not my subconscious or common sense speaking. It was as loud and stern as anything I’ve ever heard. I knew that, at that moment, God warned me with an unmistakable, direct message. I immediately turned and departed the area.

Thank God, I made it past hundreds of panicked people, wandering in shock. Miraculously, I boarded one of the crowded ferries departing to Jersey City, where I remained stranded but safe for eight hours. I later learned the authorities commandeered all subsequent ferries to transport the injured to a makeshift triage in Jersey City. I boarded that last boat from lower Manhattan only because I heeded the word of God and left precisely when He told me to.

Divine protection saved me that day and also for eternity when my wife, Donna, and I were baptized in The Church of Jesus Christ the following Sunday.

How Has God Protected You?

We’d love to hear your stories of God’s divine protection over your life. Click here to share with us.