Have You Ever Seen an Angel? 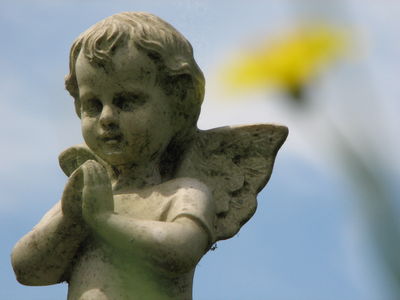 Today’s article appeared in the April 2020 issue of The Gospel News in the Children’s Corner, a column written specifically for kids. There is always a fun activity that accompanies the story, such as a puzzle or picture to color. Be sure to share it each month with the youngsters in your life!

When I first moved to Michigan many years ago, I met and loved the saints up in Canada on the Muncey Native American Reservation. Brother Mario Coppa, his wife Sister Mary, and their young children drove over two and half hours every Sunday to hold Church with the Brothers and Sisters. I got to go up in the Church van to teach the children.

Every Sunday at 6:30 a.m. we would meet Brother Mario and different drivers at the tunnel to cross the river to Canada. It was a long drive, so “don’t be late” or the van would leave you. We went no matter what—rain, sun, snowstorms, and ice. And we were greatly blessed. Every week we stopped in a town called Chatham to pick up Doris, a sister from England. We would pray, often sing, and carefully drive.

One grey and sleety winter day, as we exited the highway to pick up Sister Doris, we crossed over the icy bridge overpass. Right in the middle of the bridge our car hit ice, swirling around in a huge circle from side to side. Once, then twice, we could see the highway below us. Then the car just stopped! Our driver straightened the wheel and we carefully continued on with grateful hearts.

That night on returning to Michigan, the Coppa family went to a singspiration at their home branch. A smiling older sister who had the gift of visions came up and said, “Brother Mario! Tell us about the angel today!” He was surprised and asked her what she meant.

She replied that the Lord had shown her the Church van spinning out of control over the icy highway. As we spun from side to side, all of a sudden an angel of the Lord appeared at the front of the van and stopped the car!

We were all so grateful! But we had not seen the angel. In many ways we just took God’s protection for granted. Yet, God spared His people once again. We had been in the presence of an angel without realizing it. How many times has the Lord saved you and your loved ones? How many times?

Most angels in the Bible appear like men, without wings. However, those who meet them feel their amazing power. Our angel was invisible to us as it stopped the car from crashing over the edge. But we were saved. Sometimes angels fight for God’s people (See 2 Kings 6:14-17). They also bring messages from God.

The angel Gabriel visited Mary, the mother of Jesus, with the message she would bear a child (Jesus) who would be the Son of God and rule over a kingdom which would never end. She had not been with a man and she was told she would be pregnant by the Holy Ghost (See Luke 1:26).

Joseph, Jesus’ father, was visited by an angel and told not to be afraid to marry Mary, that the baby was from God (See Matthew1:18).

After baby Jesus was born, an angel came in a dream and warned Joseph to quickly leave because wicked King Herod wanted to kill baby Jesus. When Herod died, another angel came and told Joseph it was safe to return to their homeland.

When Jesus began His teaching, angels came. They comforted Him, stayed with Him. When the devil tried to tempt Him, Jesus did not fail. Afterwards angels came and ministered unto Him (See Matthew 4:11).

The Bible tells us that when it was time for Jesus to allow Himself to be put on the cross, His disciples fought against the soldiers who came to take Him. Peter grabbed his sword and sliced off the ear of one attacker. Jesus picked up the ear, placed it on the man’s head, and healed him (See Matthew 26:47-56). Then Jesus told Peter, “Don’t you know that if I prayed to the Father (God) He would give me more than twelve legions of angels? (A legion in the Roman army then was 3,000 to 6,000 men). So Jesus could have called up an army of thousands of angels if He chose. “But I have come here to fulfill all the prophecies [since the beginning of the Bible].” He told Peter that He was willing to go. He chose to be the last sacrifice.

Jesus showed us a new way of loving, forgiving, and serving God. He was proof that there was heaven, that we have souls, and that there is life after death.

When we have worries and concerns, Jesus hears our cries. He will guide us, bless us, teach us, and change our hearts from hating to forgiving. He will help us find jobs, food, know how to help others, and guide us every day.

Sometimes he may send an unknown angel to rescue us. He will always help us. He is the living God we serve. Trust Him. Tell Him your secrets and problems. He loves us.

With love, your friend, Sister Jan