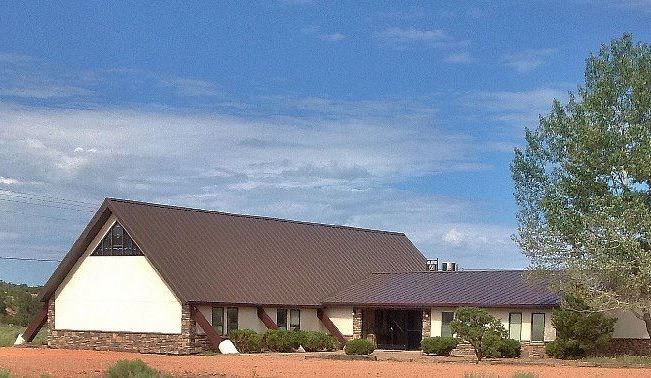 Today’s Miracle Monday is dedicated to all of you out there who are currently in the process of building a new church building. It’s a testimony told by Sister Sylvia Curry, and we promise it’ll draw you in.

I worked for General Ribbon, a factory that produced carbon paper, typewriter ribbon, and other related supplies. It was owned and operated by an older gentleman named Mr. Daggs. He had the reputation of being a kindhearted man. The night I got hired, I knelt down beside my bed and sincerely asked the Lord to make me a good worker for these people.

After a few weeks as a General Ribbon employee, I realized that Mr. Daggs was a Christian. He was a generous and benevolent boss, and all the workers in the plant were treated kindly. He knew that my husband, Chuck, was a minister, and sometimes on Monday morning, he would ask me, “Sylvia, did Chuck preach on Sunday?” If I said yes, he would ask, “Did he give it to them?” and I would laugh.

I did my job the best I could, trusting that the Lord would mold me into a good worker. I changed departments several times and finally settled in shipping. I worked there for 10 years — well, nearly 10 years. When Chuck and I decided to go and help the Church on the Navajo reservation in Redlake, New Mexico, I had been employed at General Ribbon for nine years and seven months. Like all other employees, I had been offered a profit sharing benefit, but it was company policy that profit sharing could only be given to employees who worked for the company 10 years or longer.

One day shortly before I was scheduled to leave, Mr. Daggs’ son called a meeting of the whole plant, over 100 employees.

Mr. Daggs’ son said, “I have called you all here today to ask you a simple question. Sylvia Curry is going to be leaving us to work as a missionary on the Native American reservation in New Mexico. I don’t understand it, but from what she’s told me it sounds like the Peace Corp. Due to unavoidable circumstances, she will have to leave General Ribbon three months shy of her 10-year anniversary. You all know that profit sharing is given to employees who have worked here at least 10 years. Now, the question I want to ask you is this: Do you want to give Sylvia Curry her profit sharing money? If you say yes, this will be the one and only time that this happens here at General Ribbon. We will not and cannot do this for anyone else in the future. If you say no, and you don’t think this is fair, then that’s OK, too.”

At this point, someone called out from the crowd, “Give it to her!” Others joined in until the whole lounge rang with voices. My heart swelled in thanks to the Lord.

When I went back to my desk, there was a crisp, white envelope sitting there addressed to My Dear Friend in Christ. I opened it, and there was a sheet of paper that contained one simple, handwritten line, “This is for you and your group at the Redlake chapter to use however you see fit.” Tucked behind the paper, there was a check written for about $200. There was a second paper that looked like the first and it said, “This is for you and Chuck to use however you see fit.” Behind it was another check for about $200. I knew that this was Mr. Daggs’ generosity inspired by the Lord.

After Chuck and I moved to Redlake, we still corresponded with Mr. Daggs from time to time. He wanted to know how the Lord’s work was progressing on the reservation. We kept him updated on the plans we had to build a new church building because, at that time, we were meeting in a quonset hut, which was basically a military-style metal tent.

One particular Sunday, one of our members’ young daughters got up to testify. She was just a little girl, and she said that she had asked God when we were going to be able to build our church. I left that Sunday service feeling somewhat troubled, and the following day, I was walking down the dirt road to our mailbox, and, remembering the young girl’s testimony, I asked the Lord, “Father, you heard that little girl’s question. When are we going to build the church?”

I opened the mailbox, and inside was a letter from Mr. Daggs. It read:

To my dear friends in Christ,

My wife and I were saving this money for our church building project, but our people are procrastinating. We discussed it together, and we have decided to give it to you young people. Use it for your building project.

Inside the envelope was a check for $2,000! After regaining my composure, I ran as quickly as I could back up the dirt road to Sister Sarah Watson’s house where I found her outside watering the flowers. I waved the check at her with tears in my eyes, and I told her the whole story.

I wrote a heartfelt letter of thanks to Mr. Daggs explaining the wondrous timing of the letter and how I had wept at his generosity and the Lord’s goodness. He sent me a letter in return that said, “Sylvia, I can’t have you crying.” Inside was a check for $4,000.

With these generous donations, we began building what would later become the Tse Bonito Branch. We dug the foundation, put up the wooden framing, and contracted the air, plumbing, and electrical work. After we had just finished the drywall, I got a call from Mr. Daggs. He said that he wanted to come visit our little group and see how the building project was coming along.

“Can you recommend a motel where my wife and I can stay?” he asked.

“Never,” I replied, “You’re staying at my house.” I told everyone at the branch that he was coming, and we were all so excited to welcome him and his wife. When they arrived, we took them to the church building on Sunday and showed them everything their generosity had helped accomplish. Mr. Daggs said that he was very impressed with the work we had done so far, and I immediately knew what he was about to do.

“I don’t want to talk with you, then,” he replied smartly, “Where is your trustee?” I don’t know exactly how much money Mr. Daggs donated at that time, but I did know that there was no stopping the swift, warm current of his generosity. After he and his wife returned home to California, we learned later that he shared with his son everything that he had seen on his trip to the reservation. He told his son,

“I want to do one more thing for these people. But I’m leaving it up to you. You have a good understanding of how the business is doing. Pray about it, and do what your heart tells you.” The Daggs family sent us one more check for $6,000.

Looking back, I think about the evening after I was hired at General Ribbon, and how I prayed that the Lord would make me a good worker. I had no idea that my relationship with Mr. Daggs and his family would eventually facilitate the construction of the Tse Bonito Branch. I believe that there is infinite possibility in everything we do, however insignificant it may seem, if we ask the Lord to bless it.