A Drive to Remember 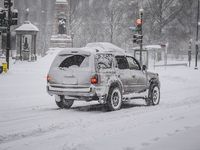 When our family arrived one Sunday morning in Muncey, Canada, the saints there were surprised that we planned on staying for the service due to a snowstorm that had started. During Sunday school and the morning service, the snow increased.

After a quick lunch with the brothers and sisters — and a prayer for the journey — Brothers Pete Capone Sr. and John Buffa Sr. got in one car, and Brother Larry, our children, and I got in our car, and we headed home. For a short while, our cars followed one another, but then we each turned on the snow-covered highways toward our separate destinations.

Our trip home was one of the most treacherous I’ve ever taken in winter. At times, we couldn’t see beyond the front of our car due to heavily falling snow, and I had to roll the passenger window down to try and find the edge of the far right lane. We knew we could not stop on the road; we had to continue driving slowly so that no one would rear end us.

During the trip, we saw few cars due to poor visibility, but we remember one particular car with Michigan plates that sped by us in the left lane.

Over the seven years that our family regularly visited Muncey, I can say that our children never remained perfectly quiet during the 1.5-hour trip. On this day, all three of them fell asleep and afforded us the quiet we needed to concentrate on a dangerous drive that ended up taking four hours. Any parent knows that this alone was a great miracle. All the while, we were silently praying for ourselves and our other brothers driving home.

When we finally arrived, we called the brothers’ wives to let them know to expect them soon. In a later conversation, we found out that the blinding snowstorm had caused one of the brothers to become nauseous and quite ill in the car. At that point, they prayed again, and God immediately parted the skies so that the snow came down heavily on both sides of the highway, but it did not fall in front of them. God had cleared the way for them to make their way home.

When we heard of this great miracle, we were grateful for God’s protection on them. We hadn’t been spared the nasty weather and wished we had experienced similar driving conditions.

The next day, Brother Larry, during his deliveries for UPS, stopped at a gas station along the highway we had traveled on Sunday. After conversing about the previous day’s terrible storm, a man took him to the back lot and showed him several smashed cars that had been involved in pileups on Sunday. There was the car with Michigan plates that had passed us on the highway.

We then realized that not only had God spared us from accident and injury but He’d also brought us through the collisions that happened ahead of us — we hadn’t even seen them. In very different ways, God revealed that He’d been with all of the brothers and sisters and their children coming home from Muncey! I thank God; He has always protected us in good and bad weather while we’ve labored among the seed of Joseph.