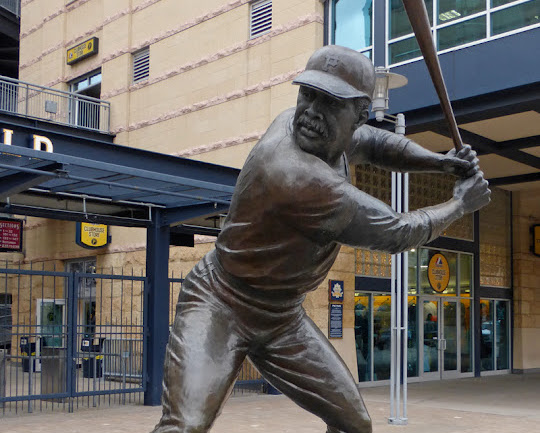 A few years ago, a couple of young men from the Church volunteered their summer to do some outreach in the Pittsburgh area as part of the Youth in Action program. One Saturday, they had a day off from their work, so Brother Tony Ricci and I decided to treat them to a Pittsburgh Pirates baseball game at PNC Park.

As we were walking around the outside of the stadium, the two young guys were looking at a statue of a baseball player. They read the name on the statue and innocently asked us, “Who’s Willie Stargell?”

Brother Tony hoped that nobody nearby had overheard this question (hey, he has to live in that town). We explained to the guys that Willie Stargell was one of the most famous baseball players in Pittsburgh history.

This story is a good example of what happens to earthly fame over time. Regardless of how famous a person may be at any point in time, that person’s fame fades with each succeeding generation until they’re either forgotten altogether or they’re just the answer to a trivia question.

One obvious exception to the above is Jesus Christ, the most famous man who ever walked the earth.

The fame of Jesus begins to grow shortly after His calling of Peter, Andrew, James, and John to follow Him. The five of them depart from the Sea of Galilee and go into the nearby city of Capernaum to attend the local synagogue on the sabbath day (Mark 1:21). A man who is possessed with a devil is also in attendance that day, and the evil spirit within him begins shouting at Jesus (Luke 4:33-34). The congregation is likely frightened at this point, but Jesus stands His ground and rebukes the evil spirit, casting it out of the man.

The reaction of the congregation to this spectacle is predictable:

“And they were all amazed, insomuch that they questioned among themselves, saying, What thing is this? What new doctrine is this? For with authority commandeth he even the unclean spirits, and they do obey him. And immediately his fame spread abroad throughout all the region round about Galilee.” (Mark 1:27-28)

During the three years of His ministry, Jesus became quite famous for miracles such as this one. However, if His fame had only been for performing miracles, that fame would have faded like anyone else’s. And 2,000 years later, none of us would have even heard of Jesus.

But the fame of Jesus does live on. His earthly fame (which normally would have faded) was instead instrumental in establishing His credibility and calling attention to His true purpose — making a way for mankind to live forever in the kingdom of God. Because of this, the name of Jesus will be famous for eternity!

“There [is] no other name given nor any other way nor means whereby salvation can come unto the children of men, only in and through the name of Christ, the Lord Omnipotent” (Mosiah 3:17).

So, let’s not worry about achieving fame for ourselves in this life — it will fade quickly after we’re gone. Rather, let’s focus on bringing fame to the name of Jesus in our generation.

Let’s make sure that people know about the miracles we have experienced (which bring credibility to our message) and that knowing Christ is a life-changing experience that lasts for eternity.

Let’s make sure that the attributes of Christ shine forth from our lives such that people can know Him by knowing us.

God forbid that anybody who knows us would ever ask the question, “Who’s Jesus?”