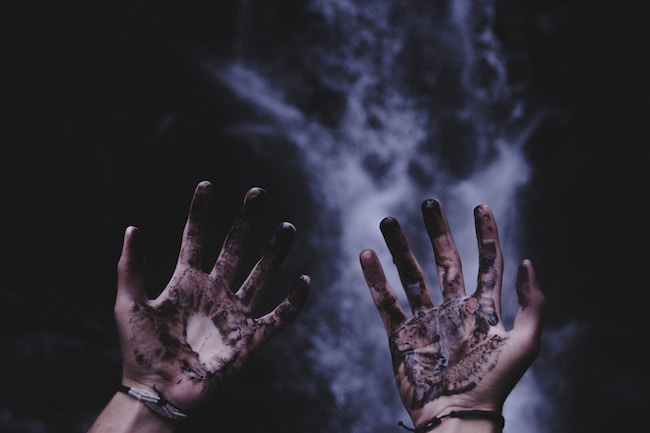 In Helaman 9, five men race to the judgment seat to see if the chief judge has, in fact, been murdered — as Nephi had revealed by inspiration at the end of the previous chapter. The five men find the chief judge’s body just as Nephi had described, and they faint in astonishment. When they are later discovered at the scene of the crime, they are arrested for the murder! While in prison, they relate how Nephi had described the crime scene, so then Nephi falls under suspicion. Yes, he had an alibi for the time of the murder, but perhaps he paid someone else to do it?

Was it the five men? Was it Nephi? Was it a hired killer? No, Nephi reveals to the authorities — also by inspiration — that Seantum, the brother of the chief judge, is actually the murderer. When Seantum is found with his brother’s blood on his clothes, he confesses to the murder, and the others are cleared of the crime.

About 56 years later, another unjust death occurred — the crucifixion of Jesus Christ. Someone was responsible for this horrible death. Who did it? Let’s look at some possible suspects:

1. Judas Iscariot: One of the twelve Apostles of Jesus, Judas accepted a bribe of 30 pieces of silver to betray Jesus. At the last supper, Jesus announced that one of the twelve would betray Him, and when Judas asked, “Is it I?” Jesus responded, “Thou hast said.” Later that night, Judas identified Jesus with a kiss, after which He was arrested. Is Judas responsible for the death of Jesus?

2. Peter: Another of the twelve Apostles of Jesus, Peter assured Jesus that he would never deny Him, that he would die for Him. Jesus replied that Peter would deny even knowing Him three times that very night. Sure enough, Peter did exactly that, even using foul language the third time to try to convince the people that he didn’t know Jesus. Is Peter responsible for the death of Jesus?

3. Chief Priests and Elders: When Pontius Pilate offered the people the opportunity to choose between releasing Jesus or releasing Barabbas, the chief priests and elders — the equivalent of today’s “lobbyists” — went about telling the people how to vote. When the vote was taken, the majority (or at least the loudest voices) wanted Jesus to be the one put to death. Are the chief priests and elders responsible for the death of Jesus? How about the people who allowed themselves to be so easily influenced?

4. Barabbas: Barabbas was a “notable prisoner,” rightly convicted of murder and other crimes. He was deserving of crucifixion, yet he was released and Jesus died in his place (as Jesus died in our place). Is Barabbas responsible for the death of Jesus?

5. Pontius Pilate: The governor knew that Jesus had committed no crime worthy of death. His wife warned him of a dream she had regarding Jesus. He lamely tried to have Jesus released by getting the people to vote for His release, but they instead voted to release Barabbas. In spite of washing his hands before the multitude, he was the one who pronounced the sentence upon Jesus. Is Pilate responsible for the death of Jesus?

So, who did it? Who was responsible for the death of Jesus? Actually, none of the above was responsible. John 3:16 tells us who sent Jesus to His death and what the motive was:

“For God so loved the world, that he gave his only begotten Son, that whosoever believeth in him should not perish, but have everlasting life.”

God did it! He sent His Son to die because He loves us and wants us to have everlasting life. So, we don’t need to focus on who in the story participated in the cruel death of Jesus. It was all part of the plan of God, with the goal of providing each of us with the opportunity to inherit eternal life. And the plan was successfully carried out — He did it!

How many of us will now take advantage of this great opportunity that’s offered to us, giving added meaning to the death of Jesus? Who will do it?