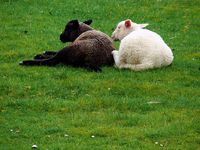 In 2 Nephi 2, Lehi shares his insights on the weather in Southern California, arranged marriages and winning a major sports championship. What? You say you didn’t see any of those insights in this chapter? Let’s take them one by one.

The date is January 15. You walk outside, and it’s a gorgeous, sunny day, temperature about 75 degrees. Would you have a bigger smile on your face if you’re a resident of San Diego or of Detroit? I would venture to say that a resident of a cold-weather climate would be much happier, as you probably had a foot of snow last week, and the typical temperature for this date is below freezing. You can truly appreciate the nice weather as opposed to the alternative.

As Lehi explains to his son Jacob, we can only truly appreciate something when we understand what the opposite would be. We most appreciate good health after a time of being ill or in pain. Times of misery give us an appreciation for times of happiness. In the spiritual realm, if there is no such thing as sin, then what does mean to be righteous? Even spending eternity with God would have less perceived value if there is not an opposite place that we are happy to avoid.

There was a time — and this is perhaps still the case in some cultures — when your parents selected your spouse for you. I’m sure getting married was still a happy occasion back then, but contrast this with the excitement of marrying the love of your life, the person you’ve chosen. It doesn’t mean everybody makes the right choice (as evidenced by the high incidence of divorce and unhappy marriages) but I don’t think any of us would want to give up the ability to choose for ourselves, right or wrong.

In this chapter, Lehi introduces the concept of free agency. Each of us gets to choose between serving God or not serving Him, between living a sinful life or a righteous one, between heaven as our final home or eternal destruction. Although God recognizes that not everybody will make the right choice, He’s set up opposite choices and allowed each of us the freedom to choose Him or not.

The Thrill of Victory

Imagine that you’re playing on a professional sports team and you take the field (court, ice, whatever) for the championship game. As you look around, you realize something’s missing — the opposing team! For whatever reason, the other team didn’t show up today, so it’s a forfeit and your team is declared the champion. As you return to your home city and perhaps ride in a ticker tape parade, how much excitement can you really feel? After all, you won the championship against nobody! Is that really a victory to get excited about?

Lehi goes back to the beginning, recalling the story of Adam and Eve and remarking that it actually was necessary for them to eat of the fruit and introduce sin into the world. Otherwise, they would have just stayed in the Garden of Eden, “having no joy, for they knew no misery; doing no good, for they knew no sin” (v. 22). They also would’ve had no children, so none of us would have ever been born. Lehi sums it up in the oft-quoted verse 24, “Adam fell that men might be; and men are, that they might have joy.”

So, if you choose to serve God (rather than the alternative) of your own free will (since you are a free agent), then you get to experience the joy of salvation. It’s only because there is opposition that we can experience this joy. The next time you go through a period of misery, think about how much happier you’ll be when it’s over. And, for real joy, think about what it will be like to spend an eternity with God because Jesus won the victory over the opposition.