Type and Shadow of Christ 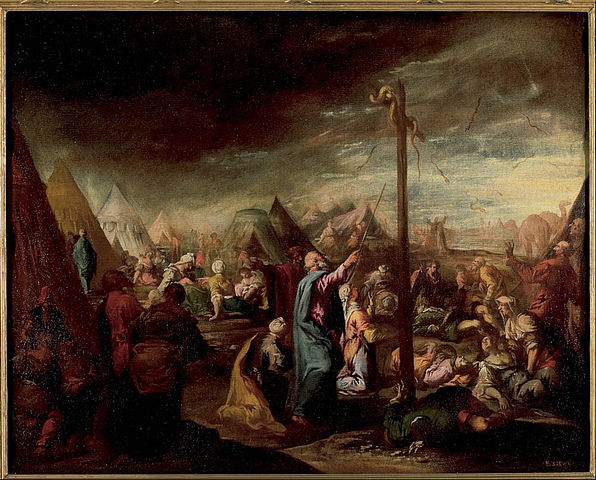 As we approach Easter weekend and the celebration of the resurrection of our Lord, Jesus Christ, I think about His sacrifice. Without His crucifixion, the resurrection and our opportunity for eternal life would never have been possible. If we look to Him on that cross, giving His life for our sins, we want to know what we need to do moving forward. We can’t ever repay Him, but what meager thing can we do? All He asks is that we be obedient, repent with a broken heart and a contrite spirit, and follow His commandments the rest of our days. If we do this, then we will have accepted that opportunity He made possible so many years ago on Calvary’s hill.

There was a type and shadow of Jesus on the cross many, many years before. In Numbers 21:1-9, we read that while still in the wilderness, God delivered up the Canaanites into the hands of the children of Israel. Not long after this, they began to murmur again. They complained against God and Moses, wondering why they were brought up out of Egypt where there was bread and water. Plus, they were tired of the manna God was giving them daily. So, God sent fiery serpents among them, and many of the people were bitten and died. This humbled the people, and they went to Moses, recognizing they had sinned and asked him to pray to God that the serpents would be taken away. Moses prayed, and God told him to make a replica of one of the serpents and set it on a pole. Anyone who was bitten would only need to look upon it to live. Moses obeyed, and when someone was bitten and looked, they lived.

The Book of Mormon tells us, in 1 Nephi 17:41, that God did this to straighten the people because of their iniquity. He sent the fiery flying serpents, but he also prepared a way for them to be healed by looking upon the brazen one. However, “because of the simpleness of the way, or the easiness of it, there were many who perished.”

I’d like to point out three main points from this.

First, like God preparing a way for the people to be healed when He sent the serpents, the plan of redemption, Jesus Christ, was prepared from the foundation of the world.

Second, God didn’t take the problem away from Israel, but He gave them a way to live, and do it productively. Today, our problems may not go away either, but God gives us a way to live productively through Jesus Christ.

Third, the way to healing is simple. All the children of Israel needed to do was look to the brazen serpent (be obedient) and they would be healed. All we need to do today is look to Christ and we will be healed. This works both spiritually and naturally, just as described in the scriptures.

As of this writing, we’re in the middle of dealing with a disease sweeping its way around the country and world. We’re stuck in our homes, not knowing what tomorrow will bring. But, as with all the calamities throughout time from Day One on, Jesus is the answer. If we look to Him with faith and obedience, He will bring us through in whatever is the best way for each of us. The invitation is open for any that haven’t “looked” yet. Come to Jesus and be healed, both spiritually and naturally. And if you’ve already “looked” once, keep on doing it every day.