Total Eclipse of My Heart 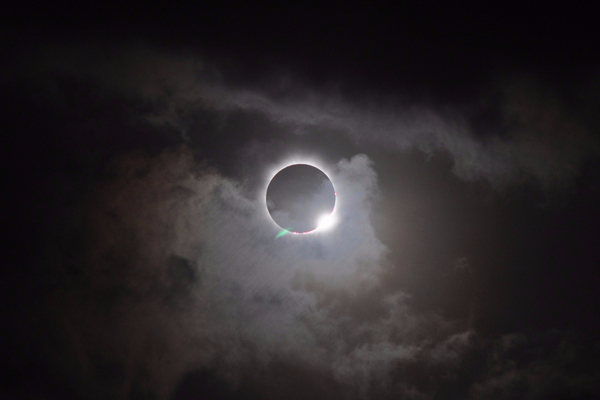 I’ll bet most people never heard of Carbondale, Illinois, until August 21 when the Great American Eclipse passed over the U.S. Carbondale just so happened to be the closest city to the point of longest duration of totality, and I just so happened to be in the city to witness it myself. An estimated quarter of a million people flocked to the small Illinois town to spend the weekend on Southern Illinois University’s campus to watch the amazing phenomenon.

A total solar eclipse is when the moon passes between Earth and the sun, and its shadow completely covers the sun, temporarily blocking its light. On August 21, I sat in a stadium with 14,000 people waiting to watch the eclipse — with our eclipse-approved glasses, of course. Around 11:52 a.m., the moon started to pass in front of the sun. Totality wasn’t reached until about 1:20 p.m.

Once the moon’s shadow completely covered the sun (totality), we sat in two minutes and 38 seconds of darkness, surrounded by 360 degrees of sunsets on the horizon. As it got darker, the temperature dropped, and the winds picked up. Birds ceased to chirp, and streetlights turned on. And, just like that, once the two minutes and 38 seconds were up, the lights turned off, the birds started singing, the winds died down, and the temperature rose.

It took almost an hour and a half for the moon to completely cover the sun. The incredible part was that, even when the smallest bit of sunlight was still visible, there was still enough light to illuminate Earth. It didn’t gradually get darker. As soon as the sun was completely covered, the darkness came all at once. As I experienced this, I started thinking of how this can easily be compared to my life as a follower of Christ.

I live a busy life. I’m a grad student. I have a job. I have homework and studying. I’m adjusting to living in a new state. I’m trying to make new friends. And on top of everything, I’m trying to keep up my relationships back home. Sometimes it’s very easy for me to put other things before my relationship with God. I don’t intentionally do this. Things start to pile up little by little until, suddenly, I’ve completely shifted my priorities to things other than Him. I slowly, but then all at once, block out the Son. I don’t realize it’s happening until I’m suddenly swallowed up in darkness, and I’m lost, trying to find the light again.

Remember the 360 degrees of sunsets on the horizon? The sunsets provided enough light to still see. It wasn’t exactly daylight, but it was enough to affirm that the sun was still there. When an eclipse is in totality, you can see the solar corona, which is essentially a ring of light outlining the shadow of the moon. Even in the darkness of the shadow, the sun still shined. Much like my spiritual life, even in the darkness of all the junk I’ve put before God, the Son is still shining, still giving me His grace, and still enveloping me in His unconditional love.

Sometimes all it’ll take is two minutes and 38 seconds to refocus, and other times the darkness lasts longer. The beautiful part is that the darkness does go away. The next time a total eclipse is predicted to pass over the the U.S. is April 8, 2024. If you happen to be in Carbondale, Illinois, you can experience totality for four minutes and nine seconds.

No matter where you are, no matter what you’re going through, no matter how long your darkness lasts, never forget that God has you in His arms and He’s ready to bring you back into the light whenever you’re ready to let Him lead you.