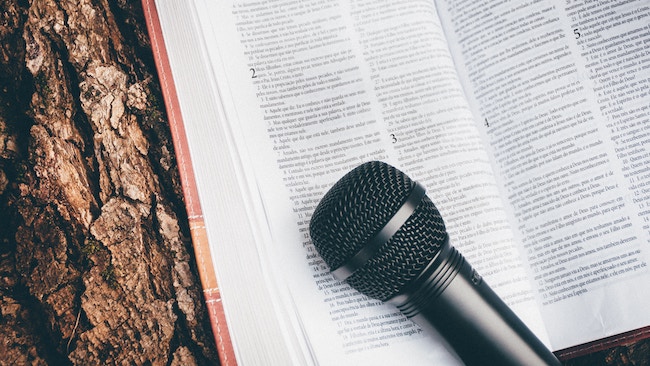 Perhaps you are familiar with a TV show called “The Voice” in which vocalists from across the country engage in a singing competition. Each competition begins with singers trying to enter the contest by auditioning for voice coaches who work for the show. Each coach then decides which of the contestants they want to work with to try to help them win the competition. This audition phase is actually called “Blind Auditions” because the coaches don’t get to see the contestants; they have to make their decisions not on appearances but purely based on “The Voice.”

There is a voice that speaks to us as servants of God. This is THE VOICE — the voice of God. Similar to the scenario described above, we don’t get to see the source of the voice. We have to “listen” — whether with our ears, our mind, or our heart — and then make our decisions based on having faith that we have heard the voice of God.

For example, we say that we have been “called” into the family of God. How were we called? The voice of God spoke; we heard it and responded favorably. Perhaps we have been called into an ordained office or some other ministry or service in life. Again, we heard the voice of God and accepted the calling. This is one way the voice of God works — it speaks to people, and they have the option to either go along with the invitation or to ignore it.

When we pray for direction from God, we should expect to hear His voice respond — typically, the Holy Ghost speaks to us in some way. Again, we have the option to either heed the voice of God — and reap the benefits of following His direction — or we can use our free will to go a different way, perhaps suffering some consequence as a result of ignoring the voice of God.

Although the above would seem to put the voice of God into an advisory capacity, it’s not always that way. There are times when God says something is going to happen — and it just happens! The voice of God is the most powerful voice there is. There is no comparison between His voice and any of the voices you’ll hear on the TV show. Helaman 12 gives some examples of the power of the voice of God, noting that at the sound of His voice:

There are many other examples in the scriptures of what happens when God speaks. The Old Testament tells us how God spoke the world into existence. In the New Testament, Jesus speaks the words, “Peace, be still,” and the stormy sea is calmed. He says, “Lazarus, come forth,” and a dead man is restored to life.

Voices singing on a TV show can win or lose a competition. Voices of people speaking can be right or wrong, agreed with or disagreed with. The Voice of God can be ignored if you so choose, but it’s never wrong. If the Voice says a certain choice is the best option for you, then it is the best option. If the Voice says something is going to happen, then it is going to happen.

There are many voices that compete for our attention on a daily basis. Regardless of how authoritative or attractive some of them may sound, we need to push aside the voices that try to influence us in a direction away from God and instead focus on THE VOICE — His voice. When we heed the voice of God, the victory is ours.