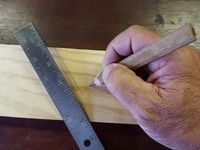 In 1 Nephi 17, the journey of Lehi’s family brings them to the border of the Arabian Sea, which they called Irreantum, meaning “many waters.” The next part of their journey would be by water, eventually crossing the ocean and making their way to the land of the Americas. However, in order to do that, they would need a ship.

None of the party was experienced in shipbuilding, but the Lord summoned Nephi onto a mountain and told Him, “Thou shalt construct a ship, after the manner which I shall show thee, that I may carry thy people across these waters” (verse 8).

Not surprisingly, when Nephi’s brothers heard the plan for building the ship, they were not exactly supportive.

However, by the end of the chapter, the brothers were convinced that the Lord was with Nephi in this venture. The Lord even told Nephi to reach out his hand and “shock them” in verse 53 to convince them of His power.

Regardless of what type of sinful life we once led, when the Lord touched our hearts and called us into His kingdom, we were transformed into servants of God. Those who knew us before may not believe that the change is real. They may be waiting for us to slip back into our old ways. Let’s not let those who are unsupportive bring us down! Instead:

If we seek to do the above, the nay-sayers in our lives just may be “shocked” at the results!

There is a famous poem that vividly describes the value that is added to the life of a person who is touched by the Lord. It goes like this:

The Touch of the Master’s Hand
by Myra “Brooks” Welch

Twas battered and scarred, and the auctioneer thought it scarcely worth his while
To waste much time on the old violin, but held it up with a smile;
“What am I bidden, good folks,” he cried, “Who’ll start the bidding for me?”
“A dollar, a dollar”; then two!” “Only two? Two dollars, and who’ll make it three?
Three dollars, once; three dollars twice; going for three…” But no,
From the room, far back, a gray-haired man came forward and picked up the bow;
Then, wiping the dust from the old violin, and tightening the loose strings,
He played a melody pure and sweet as caroling angel sings.

The music ceased, and the auctioneer, with a voice that was quiet and low,
Said; “What am I bid for the old violin?” And he held it up with the bow.
A thousand dollars, and who’ll make it two? Two thousand! And who’ll make it three?
Three thousand, once, three thousand, twice, and going and gone,” said he.
The people cheered, but some of them cried, “We do not quite understand
What changed its worth.” Swift came the reply: “The touch of a master’s hand.”

And many a man with life out of tune, and battered and scarred with sin,
Is auctioned cheap to the thoughtless crowd, much like the old violin,
A “mess of pottage,” a glass of wine; a game – and he travels on.
“He is going” once, and “going twice, He’s going and almost gone.”
But the Master comes, and the foolish crowd never can quite understand
The worth of a soul and the change that’s wrought by the touch of the Master’s hand.

Click here to listen to Christian artist Wayne Watson sing the song inspired by this poem.