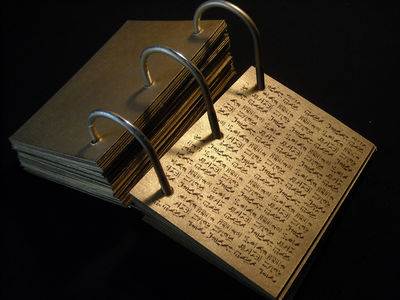 In Ether 5, Moroni shares some instructions for the man (Joseph Smith) who would receive the plates with the engravings of the Book of Mormon narrative and would be used to bring it forth to the world. The instructions include:

There is a third point, but it is not really an instruction but rather more of a prophecy:

“And unto three shall they be shown by the power of God, wherefore they shall know of a surety that these things are true.” (Ether 5:3)

The three men who wound up fulfilling this prophecy were Oliver Cowdery, David Whitmer, and Martin Harris. The three gathered together one day and prayed until an angel appeared before them, holding the plates for them to see. As stated in the verse above, the power of God in this experience convinced each of them that these were true records of God.

The testimony of these three men is also included in the first few pages of the Book of Mormon and, as the next verse states, “all this shall stand as a testimony against the world at the last day” (verse 4).

The most compelling aspect to this testimony is that none of the three men ever denied what had occurred — even though all three were eventually separated from the church! Each of them eventually had issues with Joseph Smith and/or others in the church such that they either left or were excommunicated. That would have been the obvious time for them to reveal if it had all been a hoax or if they now decided that they were deceived, etc.

When someone leaves the church (for whatever reason) and then proceeds to deny their belief in the Faith and Doctrine and beliefs of our church, it makes me sad. It means that either the person now thinks that they were previously mistaken in discerning the voice of God or else they are willing to put aside God’s message in order to strike back at a group of people with whom they are now upset. To their credit, the three witnesses of the Book of Mormon didn’t go this route — they never denied what the power of God revealed to them, making it a very powerful testimony.

Even assuming that we are in the church for life and we’re solid in our beliefs, we need to make sure that we are firm in our testimony of how the power of God has affected our lives. Don’t let unbelievers or people of little faith convince you otherwise.

My favorite example of this in the scriptures occurs in John 9. A man whose sight was restored by Jesus is surrounded by people who are telling him to not credit Jesus for this miracle: He did this on the sabbath! He’s a sinner! How can you believe this is a miracle? The man’s famous response: “Whether he be a sinner or no, I know not: one thing I know, that, whereas I was blind, now I see” (John 9:25).

The three witnesses described above couldn’t prove with any degree of certainty the truth of the Book of Mormon to those who refused to believe in it. Yet, they couldn’t deny that the power of God had revealed its truth to them.

If God has performed a miracle in your life or answered your prayer, you may struggle with getting others to believe it. You may not be able to explain why this happened or why that didn’t happen. It doesn’t matter. If you have experienced the power of God, then you know it, and it can’t be denied. It’s not changed by what others say. Whatever happens tomorrow doesn’t erase what God did today. Stand by your testimony of the power of God in your life — make it something powerful that will stand until the end of the world.