The Plane Is Going Down (So Use the Parachute!) 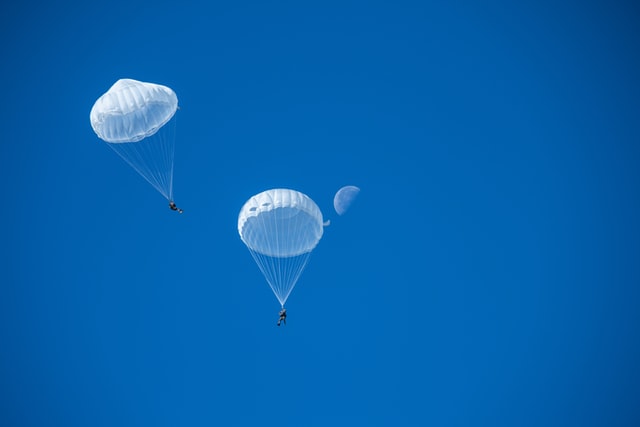 Hopefully you will never experience this, but imagine yourself in this scenario:

You’re on an airplane, flying between two cities. Suddenly, a bolt of lightning strikes the plane, destroying the engine and knocking off a wing. Oh no! The plane is going down!

Instructions come over the public address system: “This plane is going to crash. There is a parachute under your seat. Take it out, strap it on, and jump out of the closest window in order to save your life.”

Incredibly, not everyone complies. Some don’t believe the plane is going to crash. Some think they can survive without jumping out. Some question whether the parachute will in fact carry them to safety. Some are concerned about their belongings that will be left behind. Those with elite status on the airline assume that special arrangements are in place for them. Meanwhile, the plane gets ever closer to crashing.

Finally, you shout out, “Don’t you people understand?!! Every single person on this plane is going to die! The airline has given each of us a parachute so we can be saved. If you don’t take advantage of it, you will die!”

You then strap on your parachute and jump out the window, floating to safety. Some people follow but many others stay on the plane, criticizing those parachute people who think they know what’s best for everyone. This continues until the plane crashes in a ball of flame, instantly killing all who remain on board, all who refused to take the action that would have saved their lives.

You are among a group of Israelites who are speaking out against God and against His designated leader, Moses. God sends poisonous serpents among the people — you are all bitten and will shortly die.

Moses makes a brass serpent and attaches it to a pole. An announcement is made to the people: “You are all going to die. However, if you look at this brass serpent, you will live.”

Incredibly, not everyone complies. Some people refuse to look at the brass serpent.

Finally, you shout out, “Don’t you people understand?!! Every single person here is going to die! We’ve been given a way to be saved by looking at the brass serpent. If you don’t take advantage of it, you will die!”

However, some of the people remain resolute, refusing to look at the serpent. Perhaps they criticize those serpent lookers who think they know what’s best for everyone. Finally, they die, having refused to take the action that would have saved their lives.

While speaking with Nicodemus in Jerusalem, Jesus describes yet another scenario that is similar to the ones above. In this scenario, the world is filled with unbelievers such that each person “is condemned already, because he hath not believed in the name of the only begotten Son of God” (John 3:18).

The scenario that Jesus is describing is the same one that exists today. Everyone in the world is condemned to spiritual destruction. However, just like the parachute on the plane or the brass serpent for the people bitten by the poisonous serpents, God has provided a way for mankind to be saved from spiritual destruction. As Jesus explains to Nicodemus, believing in Christ as the Son of God is that way. Jesus makes it clear that He is likening Himself to the brass serpent when He says:

“As Moses lifted up the serpent in the wilderness, even so must the Son of man (Christ) be lifted up: That whosoever believeth in him should not perish, but have eternal life.” (John 3:14-15)

You may be tempted to say, “Don’t you people understand?!!” However, the best approach is to let people see what believing in Christ has done for you so that they will hopefully want to follow you on the path that leads to salvation. Love the unbelievers enough to show them the way to salvation — that’s what God did when He sent His Son to earth.

“For God so loved the world, that he gave his only begotten Son, that whosoever believeth in him should not perish, but have everlasting life.” (John 3:16)