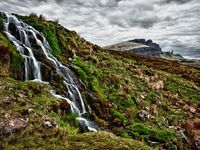 “We believe in the fulfillment and ultimate establishment of the kingdom of God on the earth while men are still in the flesh. We refer to this period as the “Peaceful Reign.”
– From Article 23 of the Faith & Doctrine of The Church of Jesus Christ

Chapters 12 through 24 of 2 Nephi consist of the prophecies contained in Isaiah 2-14. Nephi included these prophecies in his record because he felt they were important for his people to know.

2 Nephi 12 (from Isaiah 2) includes a vivid description of a period of time (still in the future) that we refer to as the Peaceful Reign or Zion. The prophecy states that people “shall beat their swords into plowshares, and their spears into pruning-hooks – nation shall not lift up sword against nation, neither shall they learn war any more” (2 Nephi 12:4).

Imagine a time when there is so little need for weapons that they will be redeployed as farm equipment! Military training will be a waste of time — why learn how to fight a war when none will be fought? No wonder this period of time is referred to as the Peaceful Reign!

Instead of focusing on fighting each other, many people, representing all nations, will make their way to the Lord’s house, which shall be established in the top of the mountains. “And many people shall go and say, Come ye, and let us go up to the mountain of the Lord, to the house of the God of Jacob; and he will teach us of his ways, and we will walk in his paths; for out of Zion shall go forth the law, and the word of the Lord from Jerusalem” (2 Nephi 12:3).

Compared to today when so many find it challenging to get in their cars and drive a few minutes to church, how refreshing to think there will be a day when people will be willing to climb to the top of mountains in order to learn the ways of God and apply them in their lives.

We have two hymns about singing on the mountain of the Lord — this is the time period that is being referred to in the lyrics. Another hymn encourages you to run ‘til you reach the mountaintop, while another urges the sheep (the people) to taste the grass on the summit and breathe the pure mountain air. In another, a blind man waits around to ask one question: How tall will the mountains there be?

It’s difficult to even imagine the majesty of the city at the top of the mountains that will draw people from all nations, including the gathering of the tribes of Israel, to a place referred to as the Lord’s house. This is the Zion that we sing about and look forward to as a church, to occur at a period of time referred to as the Peaceful Reign.