The Olympians of Scripture 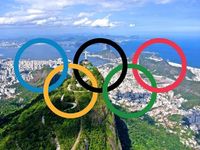 Are you still watching Olympic replays and highlights even though the games ended last week? We witnessed some remarkable feats at the Summer Olympic games. We’ve seen plenty of pictures that show the thrill of victory, and some, unfortunately, the agony of defeat.

This got me thinking about what sports some of the people from scripture would have participated in if the Olympics were held in those days. Leave your ideas in the comments below…

Soccer
The 11 apostles. Working as a team, they’d dominate the field and go for the goal.

Basketball
Alma and the four sons of Mosiah (Ammon, Aaron, Omner, and Himni). There’s a starting five I’d put up against any Dream Team.

Marathon
Paul with all his missionary trips had to have traveled the farthest while spreading the Gospel.

Sailing
Nephi. With God’s help and the Liahona, he guided the ship with his family halfway around the world to the Promised Land. He’d definitely be able to navigate the coastal waters of the host city.

Equestrian
Noah. He was the best with animals.

Swimming
Jonah. He was in the water longer than anyone.

Synchronized Diving
Naomi and Ruth. By following her mother-in-law’s lead, Ruth took a big plunge that paid off.

Track
John. After Mary told him and Peter that Jesus’ body was gone, I don’t think Usain Bolt could have passed him to get to the tomb.

Boxing
Job. No matter how hard he got hit, he got back on his feet.

There’s a lot of hoopla surrounding the Olympic champions, but isn’t it great to know that each of these scriptural heroes accomplished so much for the kingdom of God? Now, that’s something to cheer for.