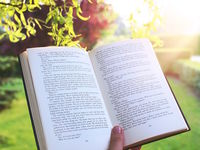 This experience is about a dream that my grandfather, Lorne Mandawoub, had of the Book of Mormon. It occurred roughly 12 years ago.

In this dream, he awoke in a dark room that was cold, damp, and made him feel scared. The mood was darkness and despair, a feeling no one would ever want to experience. He realized he was alone, as no one heard his cries.

He started feeling his way around the room, hoping to find an exit, but he found nothing around the walls; however, in the center of the room, he saw a faint light. As he got closer, he saw it was like a treasure chest structure, and he could see the light coming through the rim. When he removed the lid, the light shone in the form of a cross coming from a book wrapped in a nice cloth. He removed the cloth to find that it was The Book of Mormon. He said it was really peaceful and pleasant to see that light as it lit up the whole room.

Following this, he accepted The Book of Mormon and started to attend the Saugeen First Nation Branch where he is now a baptized member.

I would like to make one comment regarding my personal interpretation of one detail. Although my grandfather knew the truthfulness of the Bible, it seemed he was still in a state of darkness. It wasn’t until he had the other book that the light existed and the Gospel was in its fullness.

Or, as my grandfather experienced, you do not have a clear vision until you have both books in your life.