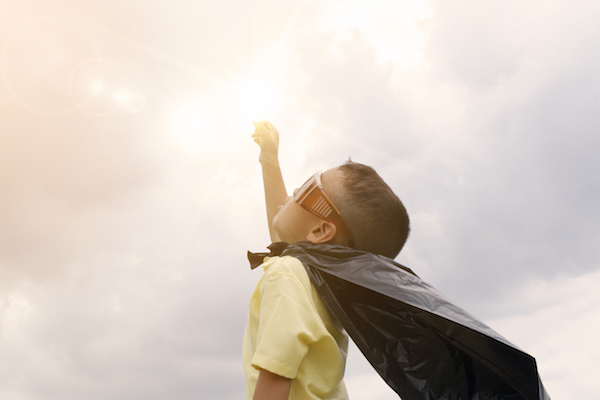 “And he did exhort the people of Limhi and his brethren, all those that had been delivered out of bondage, that they should remember that it was the Lord that did deliver them.” (Mosiah 25:16)

Perhaps some of the people thought their deliverance was due to their own strength or cunning. Perhaps others remarked that they were lucky to have gotten away. Alma made sure to tell them that it was God who had done this for them.

We’ve likely all had opportunities to do what Alma did, explaining how God answered a prayer, provided protection, or intervened in someone’s life in some way. Here’s a recent example of this happening in my own family:

My daughter is dating a young man who has been attending church with her. A few months ago, he was in a serious car accident, crashing into a telephone pole at 70 mph. The car was totaled, but the air bags deployed, preventing him from going through the windshield. He walked away virtually unscathed.

As he was relating the story to my daughter, he remarked on how lucky he was that he didn’t get hurt in the accident. My daughter (making me proud) replied, “No, you weren’t lucky — God preserved you.” When they came to visit a few days later, he told us about what happened, and I smiled when he made sure to include the words, “and God preserved me.”

I told the young man that it was good that he was wearing his seatbelt since the airbags would not have deployed otherwise. He said, “It’s a funny thing about that. I never wear my seatbelt, and I wasn’t wearing it when I started out that day. I stopped at McDonald’s for a coffee, and, just as I was getting ready to leave, a woman came hurrying across the parking lot toward my car, waving her arms. When I rolled down the window, all she said was, ‘Fasten your seatbelt,’ and she turned and walked away. I put on my seatbelt, pulled out, and two minutes later, crashed into the telephone pole.”

Now it was my turn to point out how God preserved him, even sending a messenger to him just in time to save his life. He now understands that it was God — not luck — that saved him, and he has his own testimony of God’s goodness.

You, as a servant of God, will recognize when God has intervened. Share that expertise with others when they want to attribute something good to something other than God.

In general, don’t let people attribute God’s blessings to other sources — typically, anything else but God. Tell them it was God!