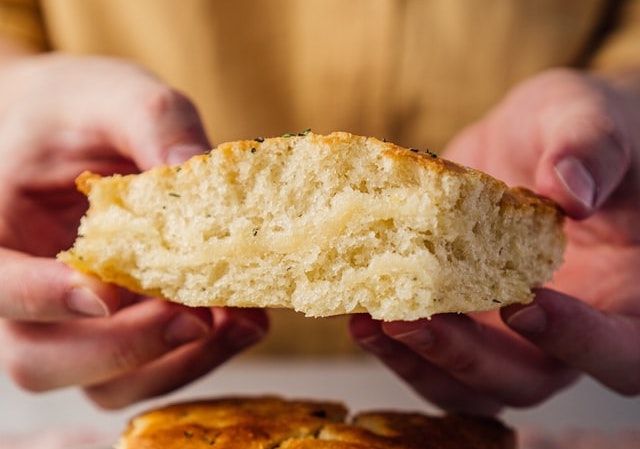 In Old Testament times, the Israelites relied on the Law of Moses to govern most of their worship practices. One of these involved the concept of “shewbread” which consisted of twelve loaves of bread (representing the twelve tribes of Israel) that were stacked on a specially dedicated table in the temple.

Per God’s instructions in Exodus 25:30 (“And thou shalt set upon the table shewbread before me alway”), there would always be this bread upon the table (any time, day or night) as a reminder that the House of Israel was always in God’s sight. Each set of twelve loaves would remain on the table for an entire week and then, on the Sabbath, the priest would replace it with fresh bread for the next week. After being taken off the table, the bread could either be discarded or eaten. However, only the priest was permitted to eat this holy bread (and he was only permitted to eat it in a holy place).

In 1 Samuel 21, David (the future king of Israel) is fleeing from an angry King Saul who has just tried to kill him. He comes to a place called Nob and meets up with a priest there, asking if the priest has any bread to spare for him and his men.

The priest has an ethical dilemma. He doesn’t have any regular bread but he does have some shewbread that he has just taken off the table of the temple. He knows that giving away the holy bread to non-priests to eat in an unholy place is a violation of the Law of Moses. However, he’s kind of afraid of David, so he would rather not turn him away hungry.

So, the priest decides on what he sees as a compromise. He tries to cast David and his men as being somewhat holy by confirming that they have not been intimate with any women recently (at least in the past three days). Based on that, the priest gives the shewbread to the men to eat.

The type of decision-making described above is what is referred to as “situational ethics.” It’s when the person knows that an action is incorrect in some way — morally, ethically, scripturally, etc. — but he decides that his personal situation is such that the incorrect action is justified.

Now, this is not to say that the use of situational ethics automatically generates bad actions. Feeding David and his men was not a bad thing to do. However, it was clearly a violation of the Law of Moses and should have been acknowledged as such.

Instead, because David was so revered for killing Goliath and later became a great king, his action of eating the holy shewbread was generally considered to be an acceptable variation of the rules — even among the legalistic Pharisees at the time of Jesus. For someone else, the action would have been condemned, but for David, it was OK because…well, because they liked him. This is another version of situational ethics — judging the same action differently depending on who did it.

After the second Passover of His ministry, Jesus and His disciples are walking — perhaps on their way home from Jerusalem — when they come to a corn field. The disciples are hungry so they pick a few ears of corn to eat. However, it happens to be the Sabbath day, so when the Pharisees see this (how do they always see these things — do they have security cameras?), they tell Jesus that His disciples are breaking the law of the Sabbath.

Now, Jesus could have explained to them why their accusation was false. And it was false — Jesus and His disciples did nothing wrong that day. As the Son of God and Lord of the Sabbath, Jesus was in a much better position to understand what God had in mind when He said to keep the Sabbath day holy — much more so than the Pharisees who kept adding additional things over time to what was not permitted to be done on the Sabbath.

However, he instead decides to point out their use of situational ethics — some would call it hypocrisy — in judging this action so harshly while considering the violation of someone who they loved and respected (David) as an acceptable action:

“But he said unto them, Have ye not read what David did, when he was an hungred, and they that were with him; How he entered into the house of God, and did eat the shewbread, which was not lawful for him to eat, neither for them which were with him, but only for the priests?” (Matthew 12:3-4; also see Mark 2:25-26, Luke 6:3-4).

When something is wrong, it’s wrong. It’s not any less wrong if the person who is doing it is someone we like (like David in the example above). And, even if the person has a “good reason” for doing it, it’s much better to acknowledge the wrongdoing and say here’s the reason why it happened rather than employ situational ethics to say there’s nothing wrong with doing it as long as you can justify the action.