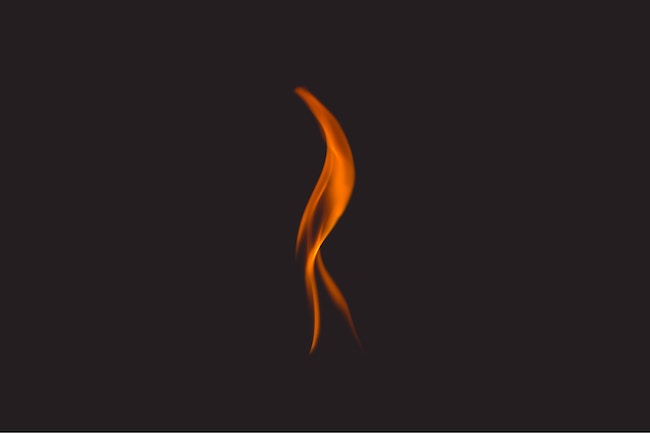 In Helaman 5, Nephi and Lehi, the sons of Helaman, enter Lamanite territory to preach the gospel. They have much success as 8,000 are baptized, but some of the Lamanites become angry and cast Nephi and Lehi into prison. The Lamanite guards later enter the prison to kill them, but they encounter an unusual sight: “Nephi and Lehi were encircled about as if by fire, even insomuch that they durst not lay their hands upon them for fear lest they should be burned” (verse 23).

After a series of events in which the walls of the prison tremble and a voice from heaven urges all to repent, Nephi and Lehi are again encircled by a pillar of fire:

“Yea, they were as if in the midst of a flaming fire, yet it did harm them not…and they were filled with that joy which is unspeakable and full of glory. And behold, the Holy Spirit of God did come down from heaven, and did enter into their hearts, and they were filled as if with fire, and they could speak forth marvelous words.” (Helaman 5:44-45)

In the above story, the lives of Nephi and Lehi were saved by the fire that all of the people witnessed that day. Afterward, they were filled with the fire that represents the Holy Ghost, which allowed God to speak through them, eventually saving many people from their sins.

The same Holy Ghost is available to each of us today. We receive it after being baptized when the ministry lays their hands on us and prays for us to receive it. At that moment, we should feel as if we are “filled with fire” — ready to live our lives for the Lord, thankful for the gift of salvation, and anxious to help others learn the way that they can also be saved from their sins.

As long as we listen to it, the Holy Ghost will also keep us on the “straight and narrow path” that will lead to having our souls saved in God’s eternal kingdom for all time. The world will one day be destroyed by fire, but we will be saved by fire in God’s kingdom.

As an added bonus to eternal salvation, the Holy Ghost also allows God to communicate with us in this life. We likely all have testimonies of being saved from going through some type of difficulty as a result of being prompted by God through the Holy Ghost. Past Miracle Monday submissions to the Gospel Blog as well as the Church history books have recounted some of these occasions, including some where lives were literally saved by heeding the prompting of the Holy Ghost. When reading these accounts, picture the person surrounded by fire as Nephi and Lehi were and being saved by fire that day.

Part of my own personal testimony is a time when my life was saved without a doubt by one word from God through the Holy Ghost:

Driving to work one morning, I exited the highway and prepared to make a left turn to drive up a hill. I looked up the hill and saw a large tractor trailer barreling down the hill at a high rate of speed. In my mind, I did the quick calculations that many of us do as drivers: Truck will reach me in 5 seconds, it will take me 3 seconds to cross the intersection and turn up the hill — plenty of time!

As my foot touched the gas pedal and prepared to press down, it happened — I heard one audible word in the car — “NO.” The word and the meaning were unmistakable and yet there was a part of me that was still thinking, “But I can make it in time!” As if trying to lift a heavy weight with my foot, I struggled against my own will and finally managed to lift my foot from the gas pedal.

I sat there and watched as the truck cruised through the intersection at such speed that the wind in its wake rocked my car back and forth. With the coast now clear, I stepped on the gas, my car proceeded into the intersection and immediately stalled, leaving me right in the path of where the truck had passed just seconds earlier. Clearly, had I proceeded across the intersection in front of the truck, it wouldn’t have had time to avoid me and my car would have been crushed, beginning with the driver’s seat. My life was saved that day by God speaking to me through the Holy Ghost.

We can all be thankful for the “fire” that God has provided that can save us from trouble, can save our lives, and can especially save us from our sins. Let’s appreciate and heed the Holy Ghost — our own personal piece of God that He has given us.