Praying in a Parking Lot 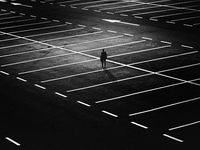 My husband, Michael, tells a lot of humorous stories from his childhood, and one of my favorites involves his middle school art teacher. There was an unfortunate classroom incident concerning a mound of clay that resulted in the frazzled teacher literally shaking Michael till his teeth rattled. When Michael reported the episode at home, Mama Bear turned into a full-on lioness defending her cub.

Michael’s mom decided to confront this art teacher the next day in the busy after-school parking lot. She cornered him, and they had a very civil discussion. It ended on good terms, and, it being a Christian school, all three of them joined hands and prayed together. Right there in the parking lot.

Michael said that, even at a Christian school, it was pretty much social suicide for any 12-year-old kid trying to fit in. Even though he was raised right, he didn’t want to be seen praying out loud in public with two adults — holding hands no less. That was guaranteed to draw the wrong kind of attention.

For the record, now that Michael is an adult, he’ll pray in any parking lot, anytime, anywhere. He doesn’t care who sees. Thankfully, he grew out of that phase.

But sometimes we make it to adulthood and never really grow out of that immature mindset — the mindset that we want to look, act, and seem just like everyone else even though God has called us to be different.

I repeatedly fall into this trap. There’s a nasty word for it: relevancy.

Even though I’m Christian, I still want to be “relevant” to those who aren’t. This is very important, I tell myself. So, I binge watch that popular TV show, play that shoot-’em-up game, and memorize the lyrics to the raunchiest songs in the Top 40. I don’t want people to think that following Christ means that you can’t have fun. Tsk, tsk, what a bad witness. Nobody’s going to accept your invitation to church if you don’t know who got kicked off the last episode of “DWTS.”

I may do this out of false piety — “I’m not too holy to have a few drinks” … “I don’t want to appear self-righteous, so I’ll laugh at that inappropriate joke.”

1 Peter 2:9 says that Christians are a peculiar people. For the longest time, I thought this meant “odd,” but “peculiar” has several definitions, and — maybe this is news to you, too — the one that KJV translators had in mind when they selected the word is actually “belonging exclusively to” — as in “the scent peculiar to dogs” or “the quirks peculiar to 12-year-old boys.”

I am peculiar to God. I belong to Him — only Him. I’m part of a “chosen generation, a royal priesthood, an holy nation, a peculiar people.” If I’m God’s girl, then I should act like it, especially in public. For me, a big part of self-denial is cheerfully forfeiting “relevancy” in favor of obedience to Christ.

The world doesn’t need Christians who look like everyone else, bedraggled by sin, silenced by society’s norms. It needs Christians who are refreshingly, dazzlingly different. People who will say, “I’ll pray for you right here in this parking lot.” “I don’t know that song on the radio, but I know the song of redeeming love.” “I’ve never seen that TV show, but I’ve seen miracles.”

Michael found himself in that parking lot prayer circle because he was a special treasure belonging to his mother. Am I willing to pray in a parking lot because I’m God’s treasure, or am I too cool for that? I’m called to “show forth the praises of him who hath called [me] out of darkness into His marvelous light,” a light that a weary world unknowingly craves.