Praying for the Storm to Cease 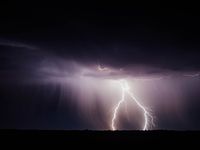 “And there arose a great storm of wind, and the waves beat into the ship, so that it was now full. And he was in the hinder part of the ship, asleep on a pillow: and they awake him, and say unto him, Master, carest thou not that we perish? And he arose, and rebuked the wind, and said unto the sea, Peace, be still. And the wind ceased, and there was a great calm.” – Mark 4:37-39.

This scripture has come to life twice for my family and me in the last 10 years. The first time was during Hurricane Ike in September 2008. We’d been through a couple near misses down in Houston, Texas, but this was our first experience dealing head-on with a hurricane.

The rain and wind started late Friday evening, and by the middle of the night we awoke to lots of noise, no power, and the sound of dripping water. We got buckets to catch the drips and tried to go back to sleep, pretty much to no avail. Just before daybreak, the eye of the storm started to move through. I could see the trees in our neighbors’ yards swaying and bending closer to the ground than I had ever seen them before.

My wife was clearly upset by all this, and I asked her if she wanted me to pray. She adamantly said yes, and so I did. I used this scripture in my prayer, asking God to calm the storm just as Jesus had done. Although it didn’t cease instantaneously, from that point on the winds began to die down. We suffered minimal damage to our home, and our power was back on later that evening. The Lord kept us safe that weekend and answered our prayer.

Fast forward seven-plus years to just a few months ago. We were experiencing some heavy thunderstorms with lots of lightning and thunder. My two-and-a-half-year-old son can sleep through just about any loud sound. Getting to sleep, though, is the hard part. Because of the storm, he was a little distressed when it was time for bed, so I said we should ask God to stop the lightning when we said our prayers. He repeated after me and lay down. From that time until after he fell asleep, I don’t recall a single flash of lightning or clap of thunder, even though the storm persisted. Praise God for answering our prayers, no matter how old we are.

Editor’s Note: Has the Lord ever comforted you through a storm — physical or figurative? Tell us about it by sharing your story for August’s no-theme Miracle Monday.