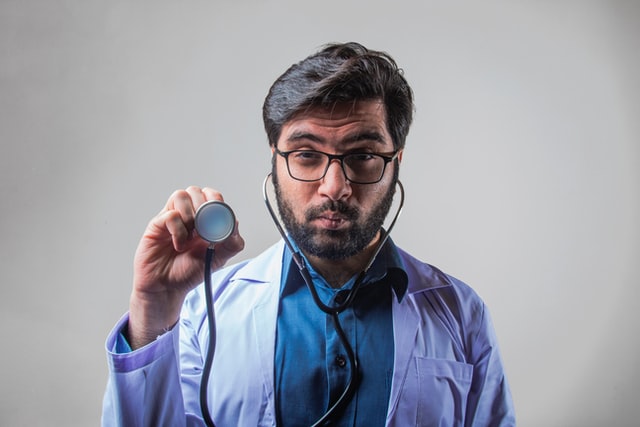 It sounds innocent enough. Playing a game of make-believe is typically a good thing, allowing people to use their imaginations. However, even assuming that the “playing doctor” that we’re talking about isn’t the version where young people “examine” each other, it’s still a game that can be harmful to people.

For example, suppose you’re at a friend’s house and you get really sick. Your friend starts pulling out bottles of pills and says, “Take two of these, and take four of these.” Then, your friend tells you to inject something into your veins. At what point do you say you don’t want to play this game of doctor and would prefer to consult a real doctor?

How about someone who takes the game even further, opening their own doctor’s office? Hey, I can see it now — I hang a sign on my office door that says “Doctor Jerry, M.D.” (I would be the only one who knows that the MD stands for Make-believe Doctor). Sound crazy? Well, I actually know how I could get away with it. I would just establish one basic rule for the office: I would only see patients who are completely healthy.

Wait, wait, go with this for a minute. Someone who is sick comes into the office. I tell them to get out, telling them that I don’t want them to contaminate anyone else in the office. But when someone comes in who is healthy, I tell them to keep up the good work and then I collect their co-pay and bill their insurance company for a consultation fee. OK, I’m not really helping anybody, but I sure feel important.

In the time of Jesus, the Pharisees led the church in the same manner as how I said I would operate my make-believe doctor’s office. If somebody came in who was sick spiritually (a sinful person), they would cast this person out of the synagogue. They wouldn’t even associate with such a person, as if they could be contaminated by being too close to a sinner.

The only people that the Pharisees wanted in the church were those who they defined as being already spiritually healthy (following all of their rules). Now, there’s certainly nothing wrong with being a person who follows the rules (just as there’s nothing wrong with being healthy). However, since the Pharisees chose to associate only with people who were already where they needed to be, it meant that they weren’t really helping anybody (but it sure made them feel important, better than others, etc.).

Based on the above, it’s no surprise that when Jesus eats and visits with a group of people who are considered sinful, He is immediately criticized. “When the Pharisees saw it, they said unto his disciples, Why eateth your Master with publicans and sinners?” (Matthew 9:11). Knowing that the Pharisees are people who just like to “play doctor,” Jesus responds accordingly:

The very dinner at which this statement is made is an indication of how Jesus is a “real doctor” when it comes to healing the souls of people. The dinner takes place at the home of Matthew (or Levi as he is referred to in Mark 2:14 and Luke 5:27). It is a celebration of the conversion of Matthew from a sinner (a publican or tax collector who cheated people) to a follower of Christ. Earlier that day, Jesus saw Matthew, “sitting at the receipt of custom: and he saith unto him, Follow me. And he arose, and followed him.” (Matthew 9:9)

If somebody like pre-converted Matthew — dishonest, disagreeable, different philosophy of life, obviously sinful — came into one of our church meetings today, what would we do?

Hopefully, we can recognize this Matthew-like person as someone who is “sick” and in need of the healing power of Jesus Christ. And, as representatives of Christ today, we can be the doctors who help bring about the healing. We have the knowledge, power and authority to accomplish this. So, let’s not play doctor — let’s be the real doctors who make a significant difference in people’s lives by introducing them to the soul-healing power of the gospel of Jesus Christ.