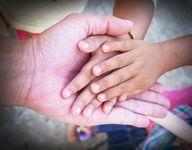 One of the traditions associated with the Olympic games is that a torch is carried from the ancient site of Olympia in Greece (where the Olympic Games were originally held in ancient times) to whatever city in whatever country the Olympics are taking place that particular year.

Needless to say, the journey, which can encompass thousands of miles and even cross continents, is way more than a single person can accomplish. So, there are designated points where the torch bearer passes the torch to another person who then continues the journey with the process continuing until the journey ends with the torch being placed at the site of the games.

In Mosiah 1, a man named King Benjamin is nearing the end of his life. Having carried the “torch” of leadership of the Nephite people for quite a few years, King Benjamin prepares to pass the torch to his son Mosiah who will then continue the journey. The people of the kingdom are invited to come and hear King Benjamin speak to them so he can inform them of this change, tell them to treat Mosiah with the same respect, etc. In other words, the journey is still the same, only the torch bearer has changed.

The journey through time is one that is, of course, way too long for any one person to navigate from end to end. Thus, when people fill certain roles, especially leadership roles, the assignments by definition are only temporary, as life only lasts for a finite period of time. If the journey is to continue, the torch must pass to someone else.

How important to the church is the role we are in? The more important the role, the more critical it is that we ensure that there are candidates to assume that responsibility when the time comes. We don’t necessarily need to select a specific successor — it may not even be our choice as to who we will pass the torch to — but we need to do the best we can to engage others, especially our younger members, in the work of the church such that they will have an interest in assuming leadership roles in the future.

Mentoring the younger members, giving them the opportunity to do real work for the church, letting them assume leadership roles — these are all ways of preparing the next generation of church leaders. They may do things differently than we would, but the same Holy Ghost is within them and will lead them in whatever way makes sense for the challenges they will face in an ever-changing world. If we choose instead to ignore the younger members, we may find that when we finally reach the end of our personal journey, there will be nobody waiting to receive the torch from us.

King Benjamin chose to pass the torch to Mosiah while he was still living, which allowed the Nephite nation to continue to thrive both physically and spiritually. We want the same for the church, so let’s make sure we are doing the best we can to prepare our younger members to lead the church into the next generation.