Parable of the Quarterback 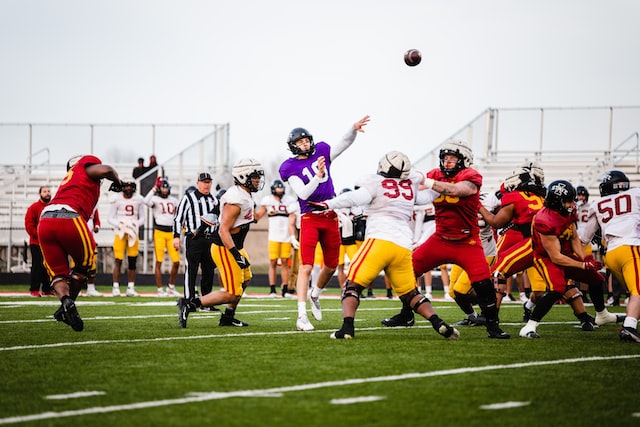 It’s been a busy day for Jesus. Earlier in the day, He was addressing some of His followers and referred to them as His family (brother, sister, mother). Now, Jesus has left the house where that occurred and is sitting by the sea. A multitude of people have followed Him there, so He gets into a ship and pushes off from the shore such that He can speak to the many people who are gathered on the shore. He decides to share several parables with them at this time.

For those who may be unfamiliar with the concept, parables are stories used by Jesus to communicate various spiritual truths such that only someone who is looking for the spiritual meaning will understand what He is saying. The people and objects in the story typically represent other things, so the key to understanding the parable is to identify what each element of the story represents and what their interactions indicate.

The first parable that Jesus shares on this particular day is the parable of the sower in which a man throws seeds onto farmland with the intention of having them take root and eventually produce fruit. Four different results are mentioned in the parable:

Why did Jesus use a sower and seeds for this parable? Because it was something familiar to the people who were listening. Many of them worked on farms so the image of a man throwing seeds and all of the different possible outcomes for the seeds were easy for them to envision, allowing them to then grasp the meaning of the parable.

If Jesus was relating the parable to us today, perhaps He would use different elements in the story — things that we who are not farmers could more easily understand. For example, if His audience included football fans, perhaps the story He would relate would be the parable of the quarterback. In this version of the parable, a man would throw footballs on a football field with the intention of having them land in a teammate’s hands and produce points. Four different results could occur:

OK, so what does the parable mean? Well, in this particular case, Jesus gives the meaning Himself (a few verses later in each of the chapters mentioned earlier) in order to illustrate how to interpret parables. Here is the meaning as explained by Jesus:

Hopefully, we all fall into the last category above. Some may produce more fruit than others, but as long as we are producing some spiritual fruit, we are in that category.

However, the point of studying this parable is not to assure ourselves that we are in the good category. Rather, the parable is encouraging each of us to be willing to be the sower or quarterback, doing our best to spread the gospel to others. Jesus is letting us know that the results will vary so we won’t give up without even trying. After all, if we sow no seeds, we will have no fruit. If we throw no passes, our team will be shutout.

Be assured that we have good seed — the more we spread it around, the more often it will land in good ground. And if you try your best and the person rejects the gospel? Well, if the quarterback throws a good pass and the receiver drops it, it’s not the quarterback’s fault, is it?

So, let’s all develop our throwing skills. What happens at the receiving end — let’s leave that in God’s hands. This is the message of the parable of the sower (or quarterback).