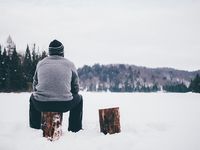 “And it mattereth not to me that I am particular to give a full account of all the things of my father, for they cannot be written upon these plates, for I desire the room that I may write of the things of God.” (1 Nephi 6:3)

Nephi, being entrusted and commanded by the Lord to keep a record of his proceedings, labored diligently that the space allotted to him might be filled with the things of God. A few verses later, he expresses the reach of this priority as he commands his seed also that they “shall not occupy these plates with things which are not of worth unto the children of men” (1 Nephi 6:6).

With 2017 just days away, these passages struck me as I contemplated my transition into a new year. Beyond the resolution clichés that surround us, there is greater depth to contemplate as members of the Gospel. It is well placed that we survey our life and heart in the sight of God, often leaving us filled with gratitude for Him and a renewed desire to serve Him in spirit and truth.

As I read the desires of Nephi, I likened the plates of his record to my own life. I asked the Lord to help me fill more pages in my life with the “things of God” and less that are “not of worth unto the children of men.” The room we are given in our heart and in our life is precious space to fill. It is a subject of great relevance that touched the days of Nephi down to the birth of Jesus, and even now to this very moment as you read these words. As you step into the New Year, may the desire of Nephi be your desire. May we all make a little more room so the record of our daily living might testify more fully of the great hope, joy, and invitation of salvation through Jesus Christ.

Below is a poem I was inspired to write some years ago. May God bless you all through this New Year!

They traveled along being led from above
few words were spoken but their hearts filled with love
the labor pains cried out, for the savior’s time was nigh
and Joseph sought a place for his wife Mary to lie

Door after door sadly they were met
by the many unwilling to give them some rest
weary from the journey hope seemed dim
while some replied, “there’s no room at the inn”

None could spare and none seemed able
but God would provide among the beasts in a stable
there was no fine linen or servants to be found
no feast was prepared, no trumpet would sound

In all of Bethlehem none knew of the king
but among the hosts of heaven the angels would sing
the day had been set, God’s will would be done
His kingdom would start through Jesus, His son

Few found him that day and so it would be
the task set at hand, to help the blind see
born to die, his life to give
so the dying in sin could once again live

An unlikely place for the son of God to start
for many looked with their eyes but not with their heart
“Is this but only the carpenter’s son?”
if only they knew that he was the one

The angry mob gathered and the Pharisees yelled
“If you are the messiah, then save yourself!”
They couldn’t accept all that Jesus gave
he would show them his love with the empty grave

No room for sin, Jesus reconciled the earth
a gift to all, esteemed of great worth.
the pearl of great price extended through time
but many trod it asunder as would the swine

No room at his birth and no room at his death
many chose poorly, but some to be blessed
today is the same though far from its start
the only room Jesus needs…is room in our heart.