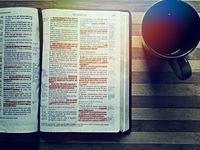 After arriving at the promised land of the Americas, Nephi spent considerable time with the various records in his possession. It was then that he prepared the plates on which he would record his own family’s record. He also read from the records of the prophets that were recorded on the plates of brass.

Nephi also spent time teaching his brothers from the writings of the prophets and even read to them from these writings. His favorite prophet to read from was the prophet Isaiah. He said that he chose Isaiah to read from because his writings were especially applicable to his family who were part of the House of Israel. The way he put it was that they could “liken the scriptures” to themselves.

We gain the most from reading the Bible and Book of Mormon if we “liken the scriptures” to ourselves. The accounts contained in these books are not meant to be just interesting stories but opportunities to learn from what the people went through and how they handled different situations, rightly or wrongly. For example:

What I have learned from Barabbas comes from thinking about how he must have felt as he contemplated being punished for his wrongdoing — and then having Jesus take his punishment for him, thereby setting him free! We have each experienced something similar, being set free from a penalty (far greater than Barabbas was facing) for which we are equally deserving by the same Jesus who was equally undeserving of the punishment He endured. I don’t know that Barabbas showed any appreciation for what Jesus did for him, but hopefully we are expressing our appreciation for what Jesus did for us by living our lives for the Lord.