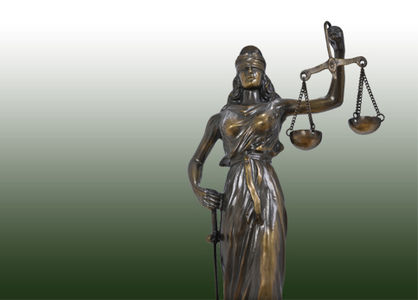 Revenge against someone who has wronged you. Prosecution, conviction, and imprisonment for committing a crime. Condemnation by God for sins committed. All of these can be described by the word “justice.”

When we recite the Pledge of Allegiance and end with words describing our country as a place where there is “justice for all,” which of the above are we wishing on everybody?

Clearly, there has to be more to justice than penalties, punishments, and paybacks. There is — the actual definition of the word includes an aspect of fairness and impartiality. Looking at it that way, when we say “justice for all,” we are claiming fair treatment for all.

Fair treatment for all is a noble goal, but it’s one we’ll always fall far short of in this life. People are inherently flawed and therefore not able to create or administer a system in which everyone is treated perfectly fairly, getting exactly what they deserve — whether a reward or a penalty.

The only truly fair system of justice is the one created and administered by God. He is the only one who can be completely fair and impartial — He is not a respecter of persons; He can’t be bought off; He doesn’t look the other way if a friend is involved. So, although we may not like to think about someone being punished for their sins, we can be assured that each person gets exactly what he deserves — it is a completely fair process.

In Alma 42, Alma addresses the need for God’s system of justice as he concludes his comments to his son Corianton:

“Ye cannot understand…for ye do try to suppose that it is injustice that the sinner should be consigned to a state of misery…If there was no law given against sin men would not be afraid to sin…The law inflicteth the punishment; if not so, the works of justice would be destroyed, and God would cease to be God” (Alma 42:1,20,22)

To summarize the above, God put a system in place to dissuade people from sinning, including associated punishments. With this system of justice in place, God must follow through with the punishment in each case or else it’s no longer a fair system — the system would then be destroyed and “God would cease to be God.”

However, in spite of this system, “all have sinned, and come short of the glory of God” (Romans 3:23). So, if justice demands a punishment for our sins, then we’re all “in the grasp of…the justice of God,…forever to be cut off from his presence” (verse 14).

Based on this, it would seem that heaven would be a lonely place for God since nobody would be eligible to go there. Perhaps some exceptions could be made for some people? No, that wouldn’t be fair — it wouldn’t be justice for all.

So, God created a plan of redemption in which His Son, Jesus Christ, would come to earth and be punished for the sins of all mankind. Under this plan, there would be no need for any further punishment for people — God could offer mercy to the repentant such that people would be eligible to enter the kingdom of heaven.

This plan is available equally (fairly) to all people today. All that is required to enroll in the plan is faith in Jesus, repentance, and baptism. The Holy Ghost then provides the rest of the directions needed to stay in God’s grace through life and eventually reap all the benefits of the plan.

God’s plan of redemption is designed to “appease the demands of justice, that God might be a perfect, just God, and a merciful God also” (verse 15). Sign up today! It’s the only plan in existence that truly provides justice for all.