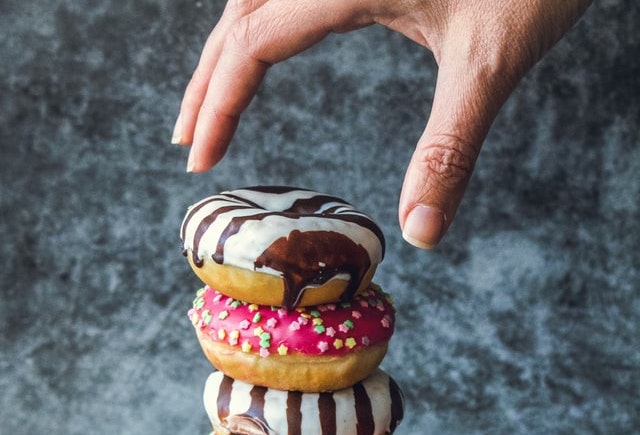 Some years ago, there was a skit on TV that depicted a boy and a girl sitting on a playground, talking to each other. The boy in the skit is supposed to be suffering from a physical ailment such that eating things with sugar (like chocolate) is very bad for him. He explains his condition to the girl, but she still pulls out a candy bar and starts eating it in front of him. She holds it out and offers it to him. He tries to refuse:

The boy winds up eating the entire chocolate bar, and the skit ends with us seeing what happens after he has given in to the temptation.

Each of us has likely faced situations similar to the above. You know you shouldn’t be taking a certain action — it’s bad for you, it’s dishonest, it’s against the Word of God, etc. But then you hear that little whisper that says, “There’s nothing wrong with this.” “Everybody’s doing it.” “You’ll really enjoy it (it’s really good)!”

Hopefully, when this happens, we have the inner strength (buoyed by the Holy Ghost within us) to say, “No! You’re the devil!” And then withstand the temptation.

And, the more often we withstand temptations, the more our spiritual strength grows. We then become better equipped to choose God’s way rather than the enemy’s way when future temptations come.

Jesus Christ had a huge mission to accomplish while He was on earth. Surely, the enemy would do his best to try to derail that mission. So, it was important for Jesus the man to develop His ability to withstand temptations from the devil. So, right after He was baptized, “immediately the Spirit [led] him into the wilderness…to be tempted of the devil” (Mark 1:12, Matthew 4:1).

After Jesus had fasted for 40 days, the devil suggested that Jesus turn stones into bread. (“You must be hungry — it’ll be really good!”) But Jesus replied, “Man shall not live by bread alone (what he can do for himself), but by every word of God (what God will do)” (Luke 4:4).

Ever see something you really want? A job, a house, a man or woman? The temptation is to say, “This looks really good. I want it. I can get it. I’m going for it.” The preferred approach for a servant of God is to put the decision in God’s hands. The end result may well be the same, but then it’s God providing for us rather than us taking our own action separate from what may be the will of God.

2. The temptation to tell God what to do (and expect Him to do it).

The devil brought Jesus to the top of the temple and told Him to jump off and have God send angels to catch Him. Jesus replied, “Thou shalt not tempt the Lord thy God” (Matthew 4:7).

Clearly, it would be unwise to intentionally put ourselves in harm’s way and then expect God to come to our rescue. On the one hand, if we don’t know for certain of a harmful condition (and especially if God is directing the action), then we can certainly ask God to protect us as we proceed. But if we are aware that taking a specific action will likely result in a harmful outcome, then we should probably avoid that action.

In general, we should avoid telling God what to do and then expecting Him to do it. Many people have had their faith damaged irreparably by expecting God to deliver what they want and then becoming disillusioned or even angry when it doesn’t come about.

3. The temptation to put things of the world ahead of God.

For the final temptation, the devil showed Jesus all the kingdoms of the world and said it could all belong to Him if He’d just worship the devil. Jesus told the devil to get lost, saying, “Thou shalt worship the Lord thy God, and him only shalt thou serve” (Matthew 4:10).

On the one hand, this may sound like an easy temptation to withstand — we all know not to worship the devil. However, the temptation to put the things of the world ahead of serving God is a very powerful temptation. Sadly, I’ve known many people who have traded away their opportunity to be an active servant of God or even their membership in the church for a whole lot less than all the kingdoms of the world.

Watch out for temptations — they may be disguised as something that looks “really good.”

The advice here is to just say no to anything that causes you to move further away from Christ rather than closer — it’s surely a temptation from the enemy.

And, by the way, don’t feel that you’ve done anything wrong if temptation comes your way. If anything, it probably means that you’re doing something right if the enemy is trying to lure you away. Just build up your ability to withstand temptation — it will cause the enemy to flee.

“Blessed is the man that endureth temptation: for when he is tried, he shall receive the crown of life, which the Lord hath promised to them that love him.” (James 1:12)