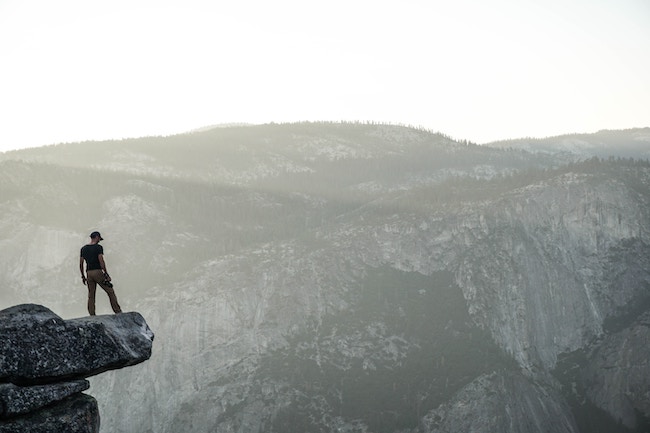 A congregation of Christian believers was holding a worship service in a country where Christianity is illegal. They kept the location of their meeting secret due to the risk involved. Suddenly, the door swung open and four men with rifles entered the room. The leader of the men announced to the room, “We are prepared to execute every Christian believer in the room. If you don’t want to be shot to death right here, you need to denounce your belief in Christ by leaving this room right now. All who remain will be killed.”

Immediately, several people in the room got up and left the room. When the last of these had departed, the leader looked at those who were left and said, “Last chance. Anybody else want to leave and save their lives?” Nobody else moved — they each prepared themselves to die for their faith. The leader nodded his head, and the four men put down their rifles. He then announced, “OK, now we know who the true believers are. Let’s continue with our worship of the Lord.”

The story above may or may not have actually occurred. However, the believers in the story who remained in the room — the immovable ones — give us an example of great faith. Nobody could move them from their faith in the Lord. Even threatening their lives couldn’t make them denounce their belief in Christ.

In 3 Nephi 1, a similar scenario unfolds. It’s been about five years since Samuel the Lamanite prophesied that there would be a day, a night and a day with no darkness to signify the birth of Jesus Christ. Although disappointed that the sign has not yet been given, the believers are unshaken and immovable in their faith that Christ will be born and they cling to the hope that the sign will appear any day. The unbelievers, however, grow weary of hearing about this sign — they want everyone to acknowledge that the prophecy is false and forget about it. They decide on a very harsh condition:

“There was a day set apart by the unbelievers, that all those who believed…should be put to death except the sign should come to pass, which had been given by Samuel the prophet.” (3 Nephi 1:9)

The believers now have a choice — they can renounce their belief and save their lives, or they can stand firm and risk being executed if the sign doesn’t appear in time. Although some might advise someone in this position to just say what has to be said to avoid death, it’s not quite that simple. If you truly believe in God, then you know that denying your faith, even to save your life, puts your soul in jeopardy.

Jesus said, “For whosoever will save his life shall lose it: and whosoever will lose his life for my sake shall find it” (Matthew 16:25). Although this statement typically refers to holding back on your life here rather than giving it to Christ, the literal interpretation of losing your life for the cause of Christ can also apply.

It so happens that the lives of the Nephites are spared, as the sign does appear in time, signifying the birth of Jesus Christ. However, even if the sign had not appeared by the date set by the unbelievers, the Nephites were prepared to be killed rather than deny their faith.

Are we that immovable? Hopefully, you never find yourself in a position where you are forced to choose between denouncing your belief in the Lord or being killed. However, if you ever are in that unenviable position, then consider the outcomes carefully. If it means giving up eternity in the kingdom of God just to pick up a few extra years on earth, that is not a good trade for you. Even if the enemy threw in a few extras — even the whole world — it still wouldn’t be a good deal. As Jesus said, “For what is a man profited, if he shall gain the whole world, and lose his own soul?” (Matthew 16:26)

Don’t wait until your faith is put to the test — examine it right now. How immovable are you? What can the enemy offer you to denounce your faith? The right answer is “Nothing!” If there is anything that is threatening to move you away from your faith, then dig your heels in — be immovable!