God Spared My Life — and My Limbs 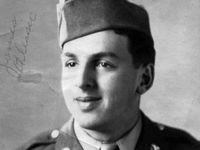 Today’s military-themed Miracle Monday is an account of the late Brother Jim Alessio’s experiences during WWII. The following is an edited version of a write-up he did for his grandson, Jared, who used it for a school project. Brother Jim was awarded the Purple Heart and Certificate of Merit for his service.

I was 18 years old when I was drafted in World War II. I was assigned to the medics and had 17 weeks of basic training in Texas where we learned much about administering first aid.

My job was to be responsible for any medical needs, such as wounds suffered in combat, and then see that the wounded were transported back to an aid station where they could get more medical attention. If they survived, then they were evacuated to a field hospital for further treatment.

My first combat experience was the airborne invasion of Holland. I rode across the English Channel in a glider that was towed by a small, two-engine C-27. Once we got to our landing area, the glider pilot released the towline from our glider, and then he guided us down to our landing. Many of these gliders crashed, and many men were killed or wounded. (This fact is reinforced by another Miracle Monday story about Brother Otto Henderson’s experience with gliders during WWII.)

In this particular battle, I was wounded by shrapnel and sent to a hospital in England to recuperate. After I was OK, I was sent back to the 82nd division, which was in France at the time. It was during the fighting in Belgium that four men were wounded in an open field by direct fire from a self-propelled weapon. I went out to tend to these men, gave them first aid, and then helped to evacuate them. This all took place during continued shelling.

Then, our division was sent to fight in the Battle of the Bulge. This was a very bloody confrontation. The Germans attacked very viciously, and we suffered heavy casualties before we were able to stop the Germans. The weather was very cold, and hundreds of troops suffered frostbite, and many developed gangrene and had to get their feet amputated. I suffered frostbite, but I didn’t lose my feet.

Brother Jim’s wife, Sister Betty, recollects that he always marveled at how he never lost his feet when so many other men did. Thank God for how he truly preserved Brother Jim and many other brave soldiers from loss of life and limb.

Brother Jim is no longer here to tell his story in person, and we’re glad that we have his testimony in writing. Do you have the memoirs of someone who has now passed on? We’d love to hear what God has done for them through you. Click here to send us your story.