God’s Message to Me 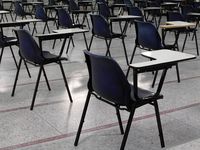 Today’s “big decision” Miracle Monday is from Brother Ray Intrieri regarding when he was facing a looming challenge in his career education.

I was in an 18-month to two-year training program at work to obtain a senior reactor operator’s license. I should have decided to enroll when I was much younger — when my brain worked better — but I was asked to enroll when I was 47 years old. It is a tough program, and I was struggling toward the end when it came time to pass the exam, which is administered by the Nuclear Regulatory Commission.

There are practice NRC exams that are typically more difficult than the actual exam, the thought being that if you can pass the practice exams, then you should do OK on the actual exam. I wasn’t doing that well on the practice exams, though. One needs to score an 80 percent on the test to pass, and I was ranging in the mid to high 70s on the practice tests. I actually considered leaving the program and going back to my former position; however, that position had already been filled. I was getting rather concerned regarding my future.

One night, I was having difficulty sleeping since there was yet another practice exam coming in a few days. And then I “heard” it. It wasn’t my voice … it was His! I don’t know if I heard it with my own ears or if it was in my head, but I heard it.

“I AM IN CONTROL.” What a comforting message!

It didn’t necessarily tell me that I’d pass the exam, but it did tell me that’d I’d be alright regardless of the outcome. That took a lot of the pressure off.

Exam time came. I was facing an eight-hour written exam and two difficult scenarios on the simulator with fellow classmates, depending on each other to perform well enough to pass. Mistakes were made, but they were not big enough for my three-man team to fail the scenarios. As far as the written exam, I got an 84 percent. Not stellar, but a pass is a pass. I will certainly take it! Thank you for your comforting message, Lord!

Next month, we want to hear any testimony or experience that fits the theme “lost and found.” You can think of it in terms of physical items or the intangible. Click here to submit your story via our online form, or click here to email us directly.