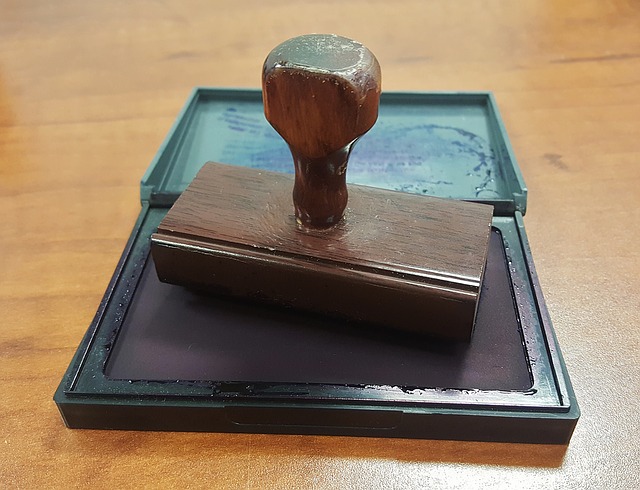 The use of a rubber stamp as a business tool dates back to the late 1800s. Such stamps had raised rubber letters that spelled out words and could be pressed onto an inkpad and then pressed on a piece of paper such that the words would then appear on the paper. One typical use would be to have a rubber stamp with the word “Approved,” which could then be used to indicate approval of a written request.

This must have happened fairly frequently since the process gave birth to an idiom that still exists today — a person is referred to as a “rubber stamp” if he is responsible for approving requests and just does so automatically without paying much attention to what is actually being requested.

In 3 Nephi 3, the Nephites are preparing to do battle with the Gadianton robbers. They approach their leader Gidgiddoni, a great prophet, and tell him, “Pray unto the Lord, and let us go up upon the mountains and into the wilderness, that we may fall upon the robbers and destroy them in their own lands” (verse 20). In other words, they want to tell God, “OK, Lord, this is how it’s going to go — we’re going to the land of the robbers to attack them. Your job is to approve our plan by helping us destroy them.”

Recognizing the foolhardiness of telling God the “plan” and expecting Him to just be a rubber stamp, Gidgiddoni replies, “The Lord forbid; for if we should go up against them the Lord would deliver us into their hands” (verse 21). In other words, God is not a rubber stamp. We should be asking Him what to do instead of telling Him what we’re going to do and expecting Him to automatically approve of it.

Gidgiddoni then tells them God’s plan, which is to gather all of the Nephite armies together in one place and then wait for the robbers to attack what will be a very strong army. The battle is described in the next chapter, but you can guess the outcome.

It’s very tempting for any of us to try to use God as a rubber stamp. It’s probably not unusual for us to pray and say something like, “OK, Lord, this is what I’m going to be doing,” followed by a request for Him to bless our actions and make them successful.

Have we asked the Lord how He wants us to do whatever it is we’re preparing to do or whether He even wants us to do it at all? If we have, or if the Holy Ghost is prompting us to do it, then it’s safe to proceed and ask for God’s blessing. If not, then we need to wait for His approval rather than assuming He will automatically approve of what we’re doing and make it successful — God is not a rubber stamp. For example:

In the above cases and any others in which decisions and plans are being made, seek God’s approval first. If He approves, then He will bless you as you move forward. If you move forward without seeking His approval, then you may face some bumps in the road. Don’t assume that God’s blessings will automatically accompany whatever you decide to do. God is not a rubber stamp.