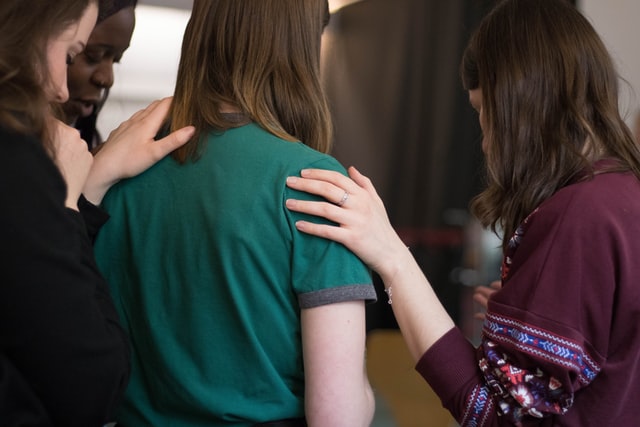 In 2004 I went on a Youth in Action trip to Redford, Michigan. We were canvassing the neighborhood in our 15-passenger van when we pulled up to a new street with fresh doors to knock on.

As I got out of the van, I felt a pain in my right side. I had felt this pain before and would later find out it’s something called Slipping Rib Syndrome. The doctor described it to me as the dislocation of rib cartilage. When it happens, I have to lie flat and wait for it to pop back into place. I quickly realized this was the pain I was feeling and told the brothers that were with us. We all piled back in the van. I tried to lay as flat as I could in the front seat as we drove back to the church building.

There, I laid on a pew hoping and praying my rib would heal as soon as possible.

Brother John Buffa felt to anoint me, and while he prayed, everyone was scattered throughout the sanctuary, undoubtedly praying, but very spread apart. Brother John finished his prayer, and I continued to lie there in pain.

A little while passed while everyone around me engaged in conversation, waiting for me to feel better, wondering what we should do next.

Brother John said he felt to pray for me again. But this time, he wanted everyone in the sanctuary to gather closer. I felt such love from everyone as I began to hear them shuffle towards my pew, congregate together, and bow their heads.

Brother John said a prayer. Immediately following the conclusion of that prayer…

The cartilage of my rib popped right back into place.

There have been a few occasions since this healing that I have had to deal with the same pain. But every time I do, I am reminded of this experience. I am reminded of the love of my brothers and sisters and how, in that moment, it felt as if we were one.

Don’t miss out on any church news or prayer requests. Sign up for Flocknote and customize your settings to get emails and/or texts from your branch, region, GMBA, GLUC, and more. Here’s how: