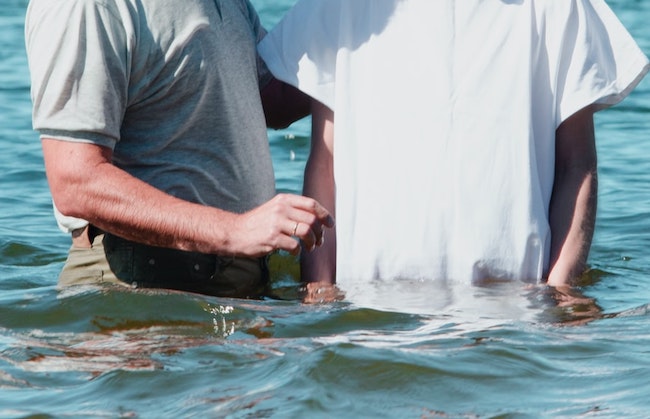 For his entire life, John the Baptist has been looking forward to one specific day — the day when he baptizes the Son of God. He doesn’t know who He is (John 1:31) but God has told him that he’ll know for certain when he sees the Spirit of God descending upon Him and remaining with Him (John 1:34).

The day begins like any other day. John is in a place called Bethabara (John 1:28) in the wilderness of Judea (Matthew 3:1), preaching repentance and urging people to be baptized for the remission of their sins (Mark 1:4). Many people who have come from the surrounding areas are moved to repentance and are baptized by John in the River Jordan (Mark 1:5, Matthew 3:6).

Among the people who have come to be baptized on this particular day is a man named Jesus who has traveled from Nazareth of Galilee to be baptized by John (Mark 1:9, Matthew 3:13). Recognizing who this is, John is hesitant to baptize Him. The purpose of baptism (as John has been preaching) is for remission of sins — this man is without sin.

Recognizing this, John says to Jesus, “You should be baptizing me, not the other way around” (Matthew 3:14).

What does it mean to fulfil all righteousness?

“[How did] the Lamb of God fulfil all righteousness in being baptized by water? Notwithstanding he being holy, he showeth unto the children of men that, according to the flesh he humbleth himself before the Father, and witnesseth unto the Father that he would be obedient unto him in keeping his commandments.” (2 Nephi 31:6-7)

Even though He was the Son of God, Jesus needed to submit to baptism in order to humble Himself before His Father and to make a visible statement that He would keep the commandments of God. He set an example for all mankind (thus fulfilling all righteousness) that all would be baptized for the same reasons — to humble ourselves (which in our case, includes repenting of our sins) and to promise to serve God for the remainder of our lives.

“And now, if the Lamb of God, he being holy, should have need to be baptized by water, to fulfil all righteousness, O then, how much more need have we, being unholy, to be baptized, yea, even by water!” (2 Nephi 31:5)

Jesus is then baptized by John (by complete immersion, as confirmed later when Jesus teaches it that way to the Nephites in 3 Nephi 11:26) and then comes up out of the water. As soon as He does that, a dove is seen coming out of heaven, landing on Him, representing the bestowal of the Holy Ghost upon Him (Matthew 3:16, Mark 1:10, Luke 3:22, John 1:32, 1 Nephi 11:27). In case John had any doubts that he had just baptized the Son of God, seeing the dove confirms it for him (John 1:34).

Jesus is now 30 years old (Luke 3:23). He has fulfilled all righteousness by being baptized. He has the Holy Ghost with Him. His mission on earth is about to begin — let the enemy beware!