Facing Irma in the Caribbean – Part 2 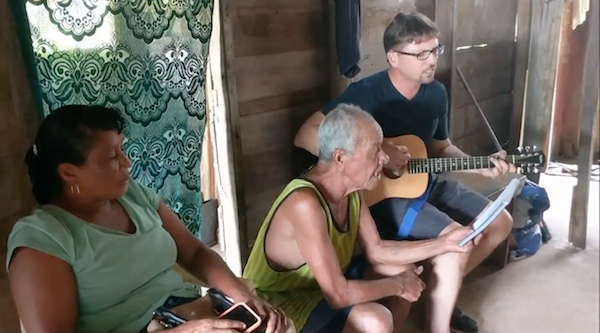 Today is part two of a two-part article about the most recent missionary trip to Dominica. We’re picking up the story where we left off yesterday, with Brothers Jerry and Patrick trying to get a flight home to the U.S. with Hurricane Irma on her way towards them.

We informed our families of our situation, and the word quickly spread throughout the church of the need for prayer. Many, many people prayed for us, and many contacted our families to encourage them. A brother sent us a vision he had of a white mist with gold letters spelling out the message, “I will not forsake my own, thus saith the Lord.”

God heard all of your prayers on our behalf. The hurricane bypassed Dominica on Tuesday night, and we were all kept safe. There was some heavy rain and some power outages, but things were back to normal by Wednesday afternoon, so we ventured out to set up some appointments for Thursday.

As we drove, we saw a white mist over the water, just as the brother had seen in his vision. We had been listening to the radio, and a man had been complaining about God allowing all these hurricanes, and the radio host reprimanded him, saying, “God will not forsake His people!”

As we left to begin our second “final day” in Dominica, we saw a woman on the road needing a ride. It was Jenelia the waitress. We were able to visit with her while we drove her into the next town, and she confirmed that she had been very blessed at our meeting on Sunday and plans to come again.

During the day, we had the opportunity to pray for several people who had relatives on other islands that were affected by the hurricane. Communication lines were down, and these people were very concerned about their loved ones. We prayed for peace for them and safety for their loved ones.

We visited with all of the church members at their homes and had prayer with each of them also. The only one we missed was Brother Felix, who wasn’t home every time we stopped by. Finally, at the end of the day, we decided to try Brother Felix one more time before leaving the area. When we arrived at his house, he was home and he had a visitor — the woman Roselia that we had been trying to visit the entire trip! As we prayed for her, she wept and said she plans to attend church regularly and will look forward to seeing us there on the next trip.

God watched over us on our way home. Our flight to Barbados was the only one that went there from Dominica on Friday since there was another hurricane expected to enter the area that weekend. Our flight to New York was cancelled, but a man randomly asked us if we needed a place to stay, and we were driven to a guesthouse to spend the night and then driven back to the airport the next morning for the flight to the U.S. Brother Patrick nearly missed his flight from New York to Columbus, but the airport personnel agreed to reopen the door of the airplane to let him board before the plane pulled away from the gate. We both arrived safely at our respective homes Saturday evening, praise God!

We thank God for watching over us on this trip, and we appreciate the many prayers offered on our behalf. We are also thankful that we had the opportunity to accomplish more during this trip as a result of the extra days we were there. We look forward to traveling there again in the near future to see what else the Lord has in store — preferably not during hurricane season, though!

We recorded some video of several members of the Dominica congregation sending you their greetings. Click here to view the five-minute video.