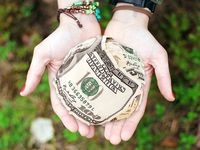 Today’s article is Part 5 of a five-part series provided by the General Church Finance Committee on finances and faith.

My parents always taught me to give regular donations to the church, so when I graduated from school and got my first full-time job, I selected an amount and began giving that amount to the church each month. This was before the days of “percentage giving,” so my monthly amount stayed pretty much the same for quite a few years, even though my income increased during that time.

When I got married and bought a house, I continued to give regularly but still the same amount. One day, I picked up a book about tithing and, after reading the book — which included scriptural references as well as firsthand experiences — I felt convicted that I was not giving my fair share to God and I needed to increase my monthly amount to be more in line with actual tithing.

I spoke to my wife, and we agreed on a new amount that was two to three times the amount we had been giving previously. On the first day of the next month, I sat down and wrote out a check for the new amount and felt good that this donation was more in line with what we should be giving.

A few weeks later, the heat pump at our house stopped working. Even as we called someone to come and look at it, I assured my wife that everything would be fine. I said, “We just increased our donation to the church, so I’m sure this will be a minor problem that won’t cost much to repair.” Well, after the serviceman looked at the heat pump, he gave us the bad news that the unit was beyond repair and we’d need to purchase a new one for $3,000. (This was 30 years ago; for the sake of comparison, a new heat pump today costs about $10,000.)

Needless to say, I was discouraged. I felt like God had let me down after I had extended myself by increasing my donations. There was even a temptation to reduce the amount back to what it was before and put the extra money toward the new heat pump. However, I decided to stay the course and realized that my donation was exactly that — a donation — and not some type of insurance policy to reduce financial setbacks.

The next day, my bank statement came in the mail. I couldn’t help but look at the balance to see if additional funds had mysteriously appeared but, alas, the balance was exactly what it was supposed to be.

At the bottom of the statement, though, there was some verbiage about the bank’s stock. Seeing this, I remembered that when the bank had gone public a few years earlier, I had picked up 50 shares for a few dollars, mainly for the thrill of owning stock for the first time. Out of curiosity, I picked up a newspaper to check out the current stock price and stared in disbelief to see that the stock price had jumped to $60 per share, meaning that the total value of my shares was exactly $3,000! My new heat pump was paid for!

I believe that this occurred to get me past my discouragement. I’ve had other financial setbacks over the years — without miraculous bailouts — but I am firm in my belief that giving a proper percentage of my income is not only a good idea but really the only way to show God that I appreciate what He has blessed me with. I fully recommend it to anyone!