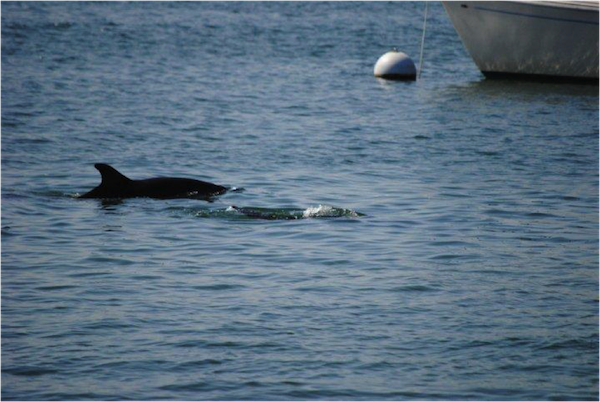 A while ago, during a Sunday sermon, I was challenged to reflect on the defining moment when God became real to me. Now, I was born into the church and grew up believing in a Savior who was much more powerful than anything this world has to offer, but God didn’t become real to me until I was around 13 years old.

Despite growing up in the church and feeling the Holy Spirit, my relationship with God wasn’t a personal relationship until I was floating down the Charleston River in South Carolina on a hot summer day in July.

My family and I took a trip to Charleston one summer on our way to GMBA camp, and one afternoon we decided we were going to visit Fort Sumter. To get to the fort, we had to take a ferry ride down the Charleston River, something I wasn’t too fond of, seeing as I get very seasick.

We got on this boat, and it was so crowded. The air was thick, and it was hot and muggy. Sweaty people were squished up against each other, and no one was comfortable. Luckily for us, we got a row of seats for our whole family, which made the ride a little more enjoyable.

The ferry took off, and when we were about halfway to the fort, we heard a commotion coming from a passenger by one of the windows. Someone spotted dolphins in the water, and suddenly the windows were crowded with passengers itching to see the playful porpoises.

Anyone who knows me well knows dolphins are one of my favorite animals. I quickly got up and tried to push my way to one of the windows, but I was too small, and there were too many people. I ran to a different window, coming up short again. I returned to where my family was sitting and slumped into my chair, upset and discouraged. I remember starting to cry in frustration.

My grandma put her arm around my shoulders and tried to console me. “Rachel, why don’t you say a prayer and ask God to help you?” I looked at my grandma in disbelief. I couldn’t believe she was suggesting I should ask the God of the universe to let me see a dolphin. The idea seemed silly, and I was reluctant to follow through with it. Thirteen-year-old me thought there were so many other things God could be doing rather than helping me in that moment, but I did it anyway.

I said a quick prayer and didn’t think much of it until a dolphin swam right up to the window we were sitting by. I couldn’t believe it. I ended up seeing five different dolphins by the time we got to the fort, and it was all because of that prayer my grandma encouraged me to say. It was the first time I had a prayer directly answered. I knew right then there really was a God looking out for me.

Seven years ago today, at 15 years old, I gave my life to Jesus and was baptized. I knew I didn’t want to spend another day without Him by my side, and I knew I wanted to serve Him for the rest of my life.

June 20, 2010 was a sunny day at the San Diego harbor. My grandfather took me into the water, and I was baptized. Walking back to shore, someone on the beach shouted and pointed out towards the water. I turned around and couldn’t believe my eyes. There were five dolphins swimming in the water right where I had previously been standing! Although I don’t believe they were the same five dolphins I saw in Charleston, I do believe they were a sign from God, a confirmation that He was pleased with the commitment I just made.

Some people might say it was just a coincidence, but I don’t believe that. With God, nothing is a coincidence.